Hi Kemi, could you kindly share this with your readers please, thankyou.

To whom can we compare the Lord? The Lord
God great In counsel and might. The Lord so full of mercy. I saw HIM at work
and l could not but testify of His power and of His grace
HE
touched a neighbor of mine and l beheld the beauty of receiving help one could
never have imagined.You
see, this neighbor of mine has seen troubles in recent times, and she finds me
‘ always ready’ to receive her when she needs a listening ear. I count this to
be a privilege. Thanks to God.
About
six years ago, she survived a fatal accident but with an amputated limb.

She
accepted her fate and learnt to adjust to a new life of moving with clutches.
Many who knew her before the accident and seeing her in the condition would
always pity her.
As
if this was not enough, her eyes started giving her concerns. She came to me
for help, l am not in medical line though.l directed her to the Government
hospital in our town. There a lot of things were discovered. She was directed
to a renowned religious eye specialist hospital several kilometers away from
our domain. She came
back more troubled.

She needed urgent surgery. One eye was bad, very bad. A person
standing before her would look more like a gathering mist. The other eye too
was also going the way of the other one. According to the medical people it had
to be done immediately. Where would she get the money. She came to me to loan
her the lot of money, and that she would pay back when her relations who
promised her the ending of the following month answer her. To be frank, l could
not help at that time. That was September 2014. We waited till October, no
response from anyone.
The eyes were getting worse. She came to my house, waited
for me to arrive home because l was out. To her, she had to see me, someone who
was not in such a position to do her a thing.l had only promised her a token of
my contribution to her medical bill, which was nothing compared to her
expectations.
I
am saying all this to tell you from where she was coming before the Lord God
reached out to her.
That
Thursday she came telling me of her woes with tears flowing seriously on her
face. At first l was not moved as l did not have what she was asking for nor
did l know what to do.
She was pleading to me to help her get the money at all
cost. I must not sit and watch her go blind totally.
However,
when she looked up to God almost like telling Him why He could not kill her
instead of allowing her to pass through a hell of situations.
God
was there when she had all the troubles she had before the last one, and He did
nothing.
God
had not made her 3 children to rise to the level of being able to stand on
their feet yet.
God
had been ‘unkind’ to her, if she had her way she would have poisoned herself.
God
had dealt badly with her….
At
least, she was still able to see and walk about with clutches and do some house
chores by herself.
God
had….
All
these and others were her lamentations.
Thank
God, l rebuked her bluntly, telling her she was only complaining and not
praying.
She
went back home with a little hope, to await what would come.
My
people, and the Lord moved. Exactly, the 8th day, the Thursday following, God
made her to know of the MTN EYE FOUNDATION eye tests going on three towns to
our place. That is how miraculously, the Lord brought her into contact with
them. She had a free and successfully cataract operation.
She
is not educated. She is not known by those that matter in world value system.
But God in heaven saw her, heard her groaning and in a mysterious manner, she
was looked for and found. Imagine yourself seeing her now, she has been
thanking God since.
The
promises of men to her failed even up till today in November, but God arose for
her and turned her sorrow and fear into joy.
Praise
the Lord.
Join
us next Sunday for another soul lifting testimony…BTW, if you have
got a great testimony you’d like to share, kindly send it in to
[email protected]
EPL: Morata agent in London to negotiate Chelsea exit

75 year old Pa Muse Alabi is  currently at the State Criminal
Investigation Department of the Oyo State Police Command, for defilement
of a 13-year-old girl (name withheld) allegedly committed by the old man, and which has resulted in pregnancy.

Tribune reports that Pa Alabi was doing carpentry work for a lady under whom the
victim was an apprentice. The young girl seized the opportunity to tell
Pa Alabi to build a safe for her. After giving her the safe, Pa Alabi
wooed the girl and she agreed to his proposal. After the first sexual
intercourse they had, it was learnt that the suspect gave the girl N200.
When she also demanded for a handset, he gave her N1,500 to buy i-tel
phone.
Click to Continue Reading
News

How my stepfather serially raped,impregnated me-13 year old (Photo)

The issue of rape, in Nigeria today, has become an everyday crime and this time one 13 -year-old One Blessing Chia, a 13 year old is the victim.

Speaking with Vanguard, she claimed her step father,
Benjamin Richard had the regular habit of beating after he lusted after
her.

“The first time my mother was not around, he took cane and was
beating me and told me that if I messed up, he would kill me, that if I
shouted or if my mummy heard anything about it, he was going to kill me.

Actress Nadia Buari recently turned 32 and she took to instagram to share these photos on a serene beach to thank God, family and friends on her journey in life thus  far.


I thank God for giving Me another Year to be Productive and
Proactive, to share my life and be a blessing to other people. It’s
another year to dream, to live,
to enjoy, to share, to celebrate, and to execute whatever left
unexecuted in my Life. Thanks for this amazing gift. My joy knows no
bounds. #MyScorpioLove #BirthdayBlessings 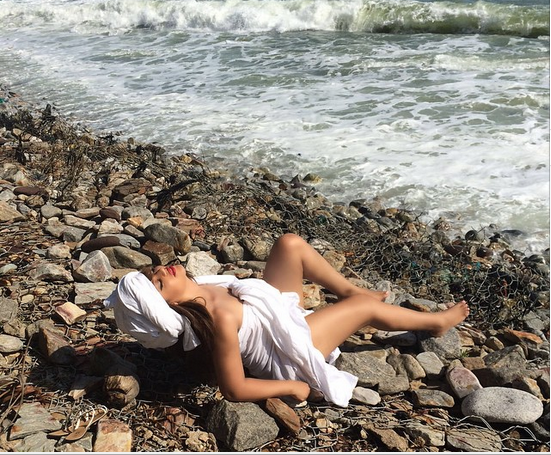 In a far far far faaaar away city…I turned a year older. Years spent
so far in this world have been so...