Peradventure you have been wondering why Facebook owner, Mark Zuckerberg, who is one of the world’s richest men, wears the same gray-coloured style of t-shirt every single day, he has revealed why and the reason is so deep and selfless.

The answer was revealed by Zuckerberg himself, during a recent Facebook Q & A session, The Telegraph reports.

He revealed that for him, wondering what
to wear every morning or what to eat breakfast would be a waste of
valuable time that he could be using to look after the world’s largest
social network.
Revealing that he owns multiple versions of the same T-shirt, he said:
“I really want to clear my life so
that I have to make as few decisions as possible about anything except
how to best serve this community.
I’m in this really lucky position
where I get to wake up every day and help serve more than 1bn people,
and I feel like I’m not doing my job if I spend any of my energy on
things that are silly or frivolous about my life, so that way I can
dedicate all of my energy towards just building the best products and
services.”
Kylie Jenner overthrows Mark Zuckerberg as youngest self made billionaire

Shan George gushes about being a grandmum

Veteran actress, Shan George says she doesn’t give two hoots about
the fact that her son, Delnoi, had a baby with his girlfriend, out of
wedlock.
George’s 27-year-old son recently welcomed a baby, and the veteran
actress stated that the only feeling she has over the development is
‘nothing but joy.

In a recent chat with Saturday Beats on Punch’, the actress said she doesn’t have a problem with the situation.
She said, “I am only happy that my son has a child, the other things
are mundane. When it comes to the question of whether I have a problem
with the fact that my grandchild was born out of wedlock, it depends.”

“Some people don’t have a problem with it, so why should I? I believe
that with everything that concerns a human being, it...
Click to Continue Reading
News

Yes today is OC Ukeje's big day and the best part is that his BFF, Kemi Lala Akindoju stood by him all through. She was his right man when they went to fetch the bride at the traditional engagement and she played his best man at the wedding.

Oh by the way, Ibukun Togonu Bickerseth was a stunning bride! 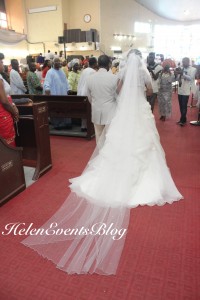 See all the photos from the trad and white wedding below:

How Yomi Fash lied about his marital status for years

Aww, popular Yomi Fash Lanso in a new interview with Punch has revealed how he deceived ladies for years with a fake ring and how his wife also deceived him while he was "toasting" her. See excerpts below:

Have you always wanted to be an actor?
Yes.
I didn’t just stumble on it. I grew up with my brothers and cousins and
going to the cinemas was the in-thing then. We had passion for such.
They used to carry me to the cinemas then because I was very small. From
that stage, I developed the passion and I knew that I would join the
profession and be like one of the people I saw. Along the way, I
developed myself by studying film- making. I read books on film-making
and I also went to seminars and workshops related to the field before...