Yea, you know how much we love LOVE stories on this blog, so we just had to share this juicy interview that Muma Gee had with Sun newspaper. 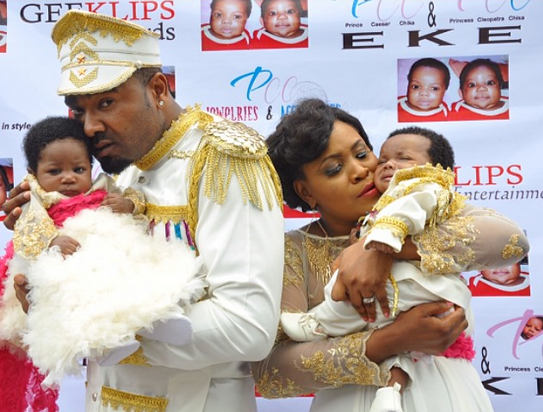 The Entertainer in Garden City, the
Port Harcourt babe opens up on motherhood, her career and how Prince
Eke, her hubby pro­posed to her. See excerpts below: 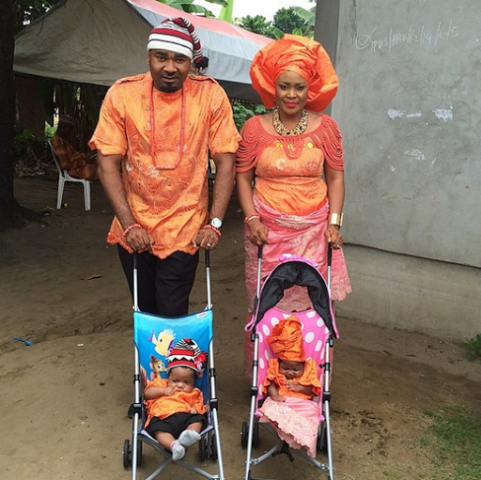 How are your twins doing?

Prince Caesar Chika Eke and his baby sister, Princess Cleopatra Chisa
are doing great by God’s design. We are grateful to God for the special
gift of these kids and praying for them to grow in the way of our Lord
Jesus Christ and Savour.

Caesar and Cleopatra are very un­usual names. Why did you choose them for your kids?

They are two great personalities that came our way.

So, how many kids are you guys looking to make?

That depends on my husband; he will determine that for us.

So, what is it like being the celeb­rity mom of twins?

I feel honoured and privileged. I feel Just like every other mom but
the differ­ence may be that numerous fans are over­joyed and happy for
me and showering me with lots of love. 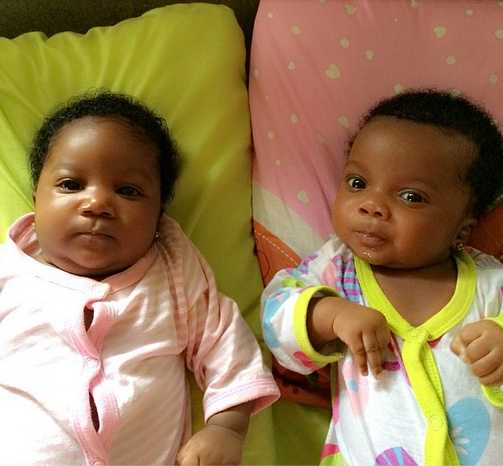 Were you ex­pecting to have twins?

I be winch? How I wan take know? Well, I didn’t until after a certain stage during the pregnancy; scan revealed it.

What was the first month with the twins like?

Wow! Frankly speaking, it was full of surprises. It was a totally new life for me and my husband.

How long are you going to breastfeed your twins considering your career as an artiste?

Exclusive breastfeed­ing has been described by doctors as best for
babies. If most celeb moms don’t do it for long, it may be because they
need to get back to work early. For me, I couldn’t do exclusive; two
babies at once? Person go die-o (Laughter). 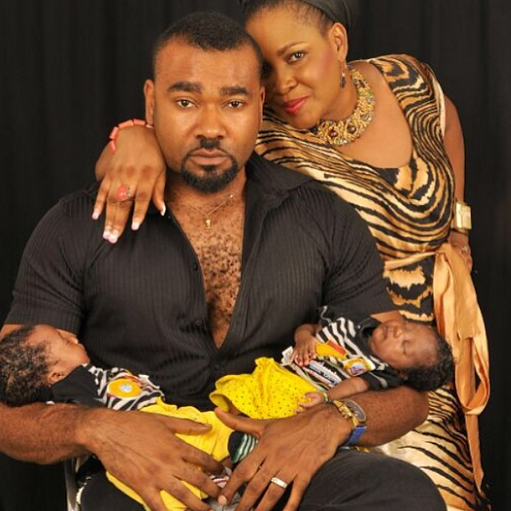 Are you going to opt for baby milk like most celebs do then?

I keep saying that when it comes to matters of family, I don’t
consider myself a celeb because I do things normally as nature commands
just like any sane person.

Are you not afraid that your boobs will sag?

(Laughter) Chineke! How did you even think about that! Alright, on a
serious note I am not afraid of my boobs sagging. My philosophy about
life is that there is time for everything and at every stage, there is
always a flipside to whatever we do. If that happens to me as a result
of motherhood so be it; I can’t remain the same forever.

How did you meet Prince Eke?

We meet in church at Emeka Ike’s Gulder Ultimate Search Celebrity
Show­down thanksgiving. Emaka happens to be my best friend and
coincidentally, Prince Eke’s best friend too. We never knew each other
until June 13, 2010, and he proposed to me seconds after we met and the
ring came 10 days later on his return from a film shoot in Ghana.

When are you dropping your next album?

The next move on my career would be to do a comeback with my new hit
album titled Motherland. Right now I am preparing for it because
anything worth doing is what doing well; that is why it looks like it is
taking forever.

It seems motherhood will make you quit music…

Music is a life style for me. How can I quit the life that I am living?

After you your last album, it has taken a lot of time to come up with another, was it because of marriage?

At some point in my life as a woman, I had planned to raise a family.
If you research into my past interviews years ago, I had it all spelt
out hence the reason for the long break. I just had to take this break
to fulfil this dream.

How do you hope to fit into the trend in music today con­sidering the fact that music is evolving every day?

Fit in? (Laughter) That I took a break from the public eye doesn’t
mean I have not been working, and with my Motherland album which is
highly contemporary and extremely trendy while still maintaining my
uniqueness, I am returning with a bang! Who were your early influ­ences?

Though I built my own unique style, I think my style is an embodiment
of charac­teristics from my three role models namely Tina Turner, Diana
Ross and Mariam Makeba; may her soul rest in peace. Consciously and
unconsciously, these three have somehow influenced me.

What has been your greatest mo­ment as a musician?

Performing live on the same stage at the Royal Festival Hall in
London with the legendary Mariam Makeba in 2001. You see, one never
knows the future; Don Jazzy was my bassist at the concert; that has been
my best moment so far.

How are you going to regain your figure after nursing your twins?

Exercise and dieting will do the magic and it’s with time because we
can’t cheat nature; like the popular saying goes, you can’t eat your
cake and still have it.

What has changed in your home since the birth of your cute bundles of joy?

Life has been sweeter ever after.

How was your expe­rience in the labour ward, was Prince Eke beside you?

The experi­ence was out of this world. Soon after the ba­bies
arrived, all pain became his­tory. Well, my hubby was there with me in
spirit but physically abroad doing a film project.

It took you and your hubby two years before making babies; was that planned?

It was planned because there was no courtship before our wedding so
we needed time to build a relationship be­fore the first baby; little
did we know that we had twins coming our way.

How are you going to safeguard your marriage from breaking up like most celebrity marriages?

My brother, I don’t need to safeguard my marriage because the phrase breaking up does not exist in my Book of Life.

It seems you can’t fight for your man?

Fight? Why should I fight when I do not see any war or threat!

How did you receive the scandal that rocked your hubby and Angela Okorie, and what was your reaction then?

S**t happens! How could I react when I am above such? No comment for now, okay, just join me and lets celebrate.

BON Awards: One lovely photo you didn't get to see :)