They say there are three sides to every story…

Yesterday, Nicki Minaj, who is without a question, one of the most successful women in the entertainment business, revealed to her followers that she had wanted to visit her former high school and speak with the students, however she was declined by the principal.  She wrote:

She also revealed that the new principal was a woman. , which led some to believe that her decision may have been based on “Anaconda” and its single cover. After Nicki revealed
her disappointment on Twitter, her Barbz flooded the school’s social
media and phone lines in support and were about two seconds from drawing
up petitions, however, the school’s principal cleared the air.
In a letter, sent to all of the students’ parents, she wrote:

Dear LaGuardia Community, It has been brought to our
attention that Nicki Minaj is attempting to generate publicity for
herself by posting negative information about our principal, Dr. Lisa
Mars, and LaGuardia Arts High School. The fact is that Ms. Minaj was told by the NYC Department of Education (DOE) that she would not be allowed to enter the school
with a television crew. The DOE has policies in place to protect the
privacy and security of all its students. I’m sure we all appreciate the
strict enforcement of these policies with regard to the safety of our
children.

In a nutshell, the principal may have allowed her to speak, if it
wasn’t being filmed. Nicki is currently filming webisodes that she
releases to her fans each week to give a peek into her life. It can be
assumed she had plans to post the footage as part of an upcoming
segment.

By Tireni Adebayo
Officials of the Nigerian National Emergency Management Agency (NEMA) have
withdrawn from the scene of the Synagogue Church of All Nations in Ikotun,
Lagos.
The Public Relations Officer,
National Emergency Management Agency, Mr. Ibrahim Farinloye told
journalists that they (NEMA) had to leave after the church’s security
staff, operating aggressively and threateningly, attacked emergency aid
officials.
“The church members have been
very aggressive and hostile to us; they attacked us and we had to withdraw our
services. I was attacked, the officials of the Lagos State Building Control
Agency and the General Manager...
Click to Continue Reading
News

So Ini Edo decided to change her look today and stopped by Iyabo Ojo's 'Fepris' salon.
She settled for corn rows - Ghana weaving.
An excited Iyabo Ojo announced the actress' visit on IG and thanked her for her patronage!
See photo below: 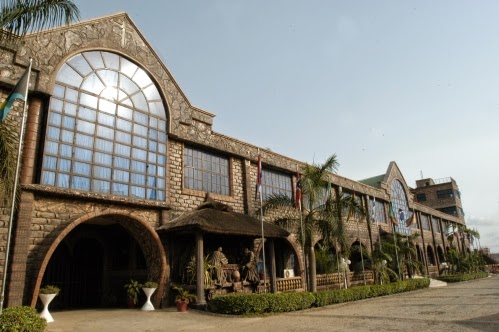 One of the buildings at Pastor TB Joshua's Synagogue Church of All
Nations Headquarters, Ikotun, Lagos has just collapsed...some members of the church and
workers doing construction work in the church premises are feared dead while many others
have sustained injuries.
So far over 15 bodies have been
recovered from the scene of the collapse building.
The Public Relations Officer of the
Lagos State Emergency Management Authority, Friday Adeboayo confirmed the
recovery of the dead bodies adding...
Click to Continue Reading