Erstwhile Super Eagles defender Taiye Taiwo has just shared this adorable photo of his kids – Aliyah and Jnr.  The first, Aliyah, named after late American singer, was born in 2007, while the boy was born in 2009.
Their mum is called Nimot.
IPOB leader Nnamdi Kanu leaves Israel, spotted in England

The name, Ruth Abosede Adekola may not ring a bell, but that of her
husband does. She is the wife of popular Yoruba actor, Odunlade Adekola,
the pillar behind the Abeokuta-based actor.
She has just revealed how they met in 1995 at a
church vigil, how blissful their  marriage has been, their 3 boys and most importantly cleared the air on the misconception that Odunlade is a bully and wife-beater.

See excerpts from her interesting interview with City People below:

How did you meet Odunlade?
We actually met miraculously. We both attended the same church and we
were at a programme in the Church auditorium where we started as friends
back then. The church is...
Click to Continue Reading
News PR extraordinaire Vannessa Amadi, who helped push D’banj and Genevieve Nnaji‘s celebrity power into new heights, welcomed her first child - a boy with husband Oki a few days back and she has an amazing story that defied her doctor’s reports.
After posting an image of herself
holding and kissing her little prince next to his bed, she left a
comment about the not-so-easy journey to having a child and how she survived cancer.

“Awww thanks SO much guys! When Jesus says YES nobody can say no. With
Him all things are possible. I remember when...
Click to Continue Reading
News

He wants to die! Sad story of a former Nigerian boxer 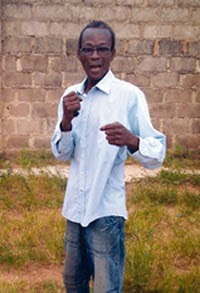 Ex-boxer Ayodele Peters who represented Nigeria at the 1980
Olympic Games in Moscow, and has won several Gold medals for Ogun State in
boxing says he would have committed suicide if not that he knows it is a sin
against God.

Years after representing Nigeria and Ogun State in different
boxing games, the well-respected champion whom a lot of boxers look unto is a
shadow of himself.
Ayodele lost his wife and two kids years ago in
what he called a spiritual attack, but he would have been able to save them if he
had N5,000.

"I am dying every day and the Lord knows...