How we met:
“I knew he liked me from when I was in the
University of Ife but I was young and he was so accomplished so I was
kind of worried. After I left Ife and went to do my NYSC in Kaduna state,
Dr Biodunjeyifo came to visit me and said Kongi (Prof Wole Soyinka) had
been looking for me. After the service year, Dr Yomi Ogunbiyi who was at
the Guardian got me a job there and one day, Wole stopped by. Our
courtship was interesting”
Challenges we encountered:
“There were objections from everywhere except from my
sisters and brother who were happy if I was. I also had the support of
his siblings here. My parents along with most of my relatives objected,
not because of anything, they just felt he was too famous and too
accomplished. They worried about that. But within a few months after we
were married, my parents had changed their mind and they loved him until
they passed away. His close friends didn’t have a problem with it but
also everyone had an opinion. Then came the Nobel Prize in 1986 and
that derailed everything for a couple of years. More than a quarter of a
century later, those opinions didn’t count, we are still trudging
along. I have enjoyed love because of him”
How he assists in the kitchen: “He cooks and he is quite good at it. He even cooked about two days ago.
When the boys were really little, one day in California, he called all
of us to the kitchen and said he wanted to have a family meeting. They
were so young I don’t even think they had any concept of what a family
meeting was. He lined all three according to their heights and asked me
to sit. He said he has something to tell us and he was only going to say
it once. He whipped some cooking utensils, moved them around noisily in
the pot, threw some up, caught them performed a few tricks and then
told us to listen. He said there were only three people in the world who
can cook pasta like he does; one is dead, the other is in Silica, Italy
and he is the third one and he is going to cook something that we have never
eaten. He cooked pasta that day and we truly enjoyed it. True
dramatist.” she said.
Drama as Dino Melaye collapses at police premises (video)

By Tireni Adebayo
A Nigerian Air Force Mi-35 Helicopter on a training mission this
afternoon, crashed due to technical fault at a location South of Bama, Borno state.

Director of Defence Information, Chris Olukolade revealed the news via a press statement:

A Nigerian
Air Force Mi-35 Helicopter on a training mission this afternoon,
crashed due to technical fault at a location South of Bama.
Investigation has commenced to unravel the circumstances that led to
the accident.  Meanwhile, it is established that the crash is not as a
result of any enemy action. Further details on the crash will be made
known as soon as the investigation progresses. 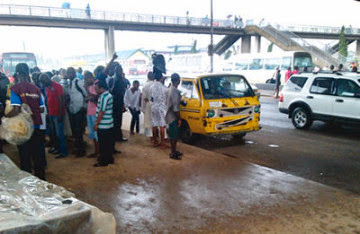 A four-man gang wearing the uniform usually used by officials of the anti-robbery
squad, stormed Oshodi under bridge on
Saturday around 2:30pm, snatching a young woman at gunpoint.

The victim was walking along with her mother when
she was confronted by the men and whisked away in a Honda Pilot jeep.
When the mother tried to save her daughter, the men was
threatened  her with a gun.

PUNCH  reports the young woman struggled to avoid being abducted by
snatching handcuffs from one of the abductors and smashing...
Click to Continue Reading
News

We all know Jermaine is in the Squareville, Lagos, Nigeria at the moment.
"And our domestic staff too got to meet Jermaine Jackson.#dreamcometrue I love my staff...." Lola Omotayo-Okoye disclosed.