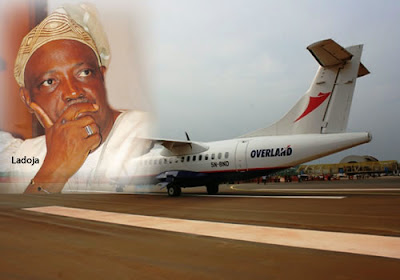 An Overland Airways plane with registration number 5NBPE, which took off
from the Ibadan airport yesterday morning had its wing damaged as it
was approaching the Niger State airspace and had to make a detour to the
Murtala Mohammed Airport, Lagos.
Passengers onboard were mostly
National Conference delegates: they include former governor of Oyo
State, Senator Rashidi Ladoja; a former President of the Nigerian Union
of Journalists, Comrade Lanre Ogundipe; Senators Gbenga Kaka from Ogun
State; Hosea Agboola from Oyo State and Demola Akinlabi, an officer in
the Accountant General of the Federation’s Office; Oyo State

The
delegates were returning to Abuja to resume plenary at the ongoing
National Conference. The incident was confirmed by the Nigerian Airspace
Management Agency (NAMA) which said that a domestic flight 1170
operated by Overland Airways with an ATR-42  aircraft diverted from
Ibadan enroute Abuja to Lagos early Monday, following a reported cracked
windshield.
After about 3 hours in Lagos, the passengers were moved
into another Overland aircraft with registration number 5N-BPF which
arrived from Enugu.
READ
Genevieve reveals how prophet delivered a young lady tied up in a bottle (video)

WIN N10,000 CASH in the Nigerian Radio Stations Flip-a-Celeb Promo 2!!
“It was during a break session” Delegate spotted playing scrabble at national conference
To Top