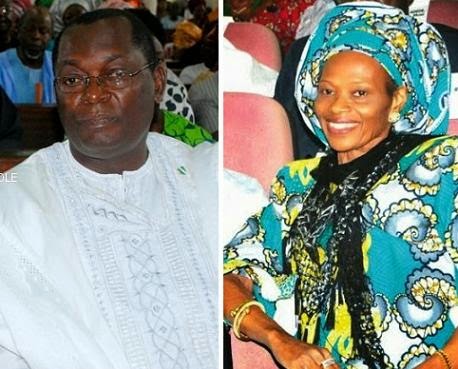 Since
the news of her strange ailment broke out,  Prof
Dora Akunuyi husband, Dr Chike Akunyili has been off the social media; he however took to his facebook page a while ago to thank
fans for their support for his fast recuperating wife…

See his concise message below:

“May the good LORD bless all of you that have prayed and still pray for my
unique and lovely wife DORA. She is a noted personality and risked everything
for the love of our dear country NIGERIA. I thank God that I was present when
she made that very singular speech. It resonated in the corners of the Confab
and instantly touched many hearts. The illness has not blunted her childlike
frankness in our blessed 36 years of marriage. Tx+”

By Tireni Adebayo
Wow, it's good to know that brands now recognise bloggers...yayy!
The trio of music star Tiwa Savage; on-air personality Toke Makinwa; and
blogger Sisi Yemmie have sealed mega endorsement deals with Maggi.
For Tiwa, this is the 4th mega deal as she has endorsements
with MTN, Pepsi, and Forte Oil; while it's Toke's 2nd as she is a Face
of Lipton Tea.
This is Sisi Yemmie's 1st....her brand endorsement is coming a few days after she
(alongside her beau Yomi Odusanya) emerged winners of 'My Big Nigerian
Wedding Competition'.
The unveiling ceremony for the new Maggi
ambassadors will hold in Lagos on...
Click to Continue Reading
News

The traditional marriage of Jonathan’s foster daughter is currently going on in Beyelsa and here are some first photos courtesy of Maestromedia and Helen Ozor.

The traditional marriage journey began last night Friday, April 4,
2014 at about 7pm, with the payment of bride price and exchange of gifts
between the 2 families, it's part of the rites that must be observed.
Though, it wasn't the main event itself, in attendance were the family
members on both sides and a sprinkling of friends, the likes of Hajia
Bola Shagaya, Senator Ben Obi, Ifeanyi Uba, Governor Seriake Dickson of
Bayelsa, Governor Liyel Imoke, some 1st ladies and many more.

The ceremony we heard started at about...

By Tireni Adebayo
The burial service held at the Lagos Catholic Cathedral, Lagos Island and was
attended by close friends and family including her mother.
Afterwards, she was taken to the Ikoyi Cemetery, where she was buried.
Surprisingly many of the top Nigerian entertainers who publicly wrote condolences
on their social media pages were missing at the burial.
Only a handful of Nigerian celebrities - Nikki Laoye and her husband,
Jahborne,...
Click to Continue Reading