18 years old virgin killer Ikechukwu who implicated controversial Lagos
pastor Sign Fireman in his alleged ritual murder of a 12 year old girl,
Bose Ogoja, has been accused of lying by his own mother.

And according to his mum, her son is a serial rapist, who became
one after he was cursed by a neighbor in 2009. That the alleged
ritual killing had nothing to do with rituals or Pastor Fireman but was a
clear case of rape that led to murder.

Talking with reporters on Thursday, Mrs Esther Egbo said although they attended Fireman’s church, they
never met with him because as the General Overseer of the church, it was
not always easy for members to see him at random.
She said her son did not even have Fireman’s telephone number and
wondered where the supposed meeting he had with her son took place.

Ikechukwu had earlier said he approached Pastor Sign Fireman for money,
but he told him that he should strangulate a little girl.

That while strangulating the girl, she would pass out faeces in the
throes of death. and if the boy could do this, he would give him N100,
000.

However, the suspect’s mother says the boy later confessed to her that
nothing of such happened and that the 12 year old only passed feces due
to the rape and strangulation.

An aide to the pastor has also described the allegations against Fireman as ridiculous, adding that Fireman could not have stooped so low as to encourage a teenager to commit murder.

“I have spoken to the boy (Ikechukwu) and he told me that he was coerced
into saying what he said to the press. Pastor Fireman is a very rich
man. What sort of money ritual would he want to do? His father owns a
gold factory in Russia while his mother is a professor at ABSU. This is a
man that has distinguished himself.

Tonto Dikeh is frustrated with the new Instagram updates; Here's why

Contacted by Vanguard, Dr. Fireman said he was innocent of the allegations, saying he does not know the boy.

Anyway, here are 10 things that you probably didn’t (and should) know about Pastor Sign Fireman.

2. He got married last year at his church headquarters in Surulere, Lagos.

3. He likes the colour Yellow….he is said to have a fleet of cars all painted yellow.

4. He was accused of being a fake by late actor, Enebeli Elebuwa

Late Nollywood actor, Enebeli Elebuwa, who is seen here being touched by Pastor Fireman, claimed that the preacher was a fake.

5. A documentary has been made about him: The documentary was made by journalist Seyi Rhodes of Channel 4′s
“Unreported World”and it chronicles the lives of Nigeria’s millionaire
pastors.

6. He is said to have been involved in affairs with a number of Nollywood actresses, most popular of whom is Empress Njamah.

7. He has a bus stop named after him

The preacher’s church is located at the self titled Fireman’s bus stop at the Aguda area of Surulere.

8. All the hot girls in Lagos attend his church

This flyer was an actual one made by Fireman’s church to invite the “hot girls in Lagos” who weren’t members yet.

9. He loves expensive cars…he has a fleet of luxury vehicles,
ranging from Range Rovers to Hummers and they all have customized plate numbers.

10. He was arrested this week for a ritual murder.

By Tireni Adebayo
PSquare is currently trending on Twitter, all thanks to their shocking performance at the Glo CAF Awards that held tonight at the Eko Hotel, Lagos.
See all the tweets and Peter's Okoye apology below:

Peter and Paul Okoye are getting set
to storm Dubai for a double wedding in three months’ time, April.
Though the twin brothers are yet to
pick a particular date in the month of April, they are quietly working on
where, when and how.

“If all things work out as planned the two brothers would walk down the aisle
together with their heartthrobs (Lola & Anita) come April of 2014 and we
can confirm to you that accept for some extraordinary last minute change of
heart, the venue for the planned superlative wedding is most definitely Dubai.”
Maestromedia... 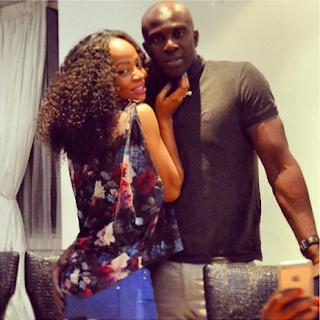 So Toke Makinwa got a mail from a supposed fan today and it "kinda made her laugh"...she "literally cried"!

Meanwhile, Toke is living her dreams and one of them is having her own TV show before 30. She is currently on set shooting her show "Trending" - a show where celebrities would clear the air on controversial issues about them....how sweet...Goodluck to her! See behind-the-scene photos below: 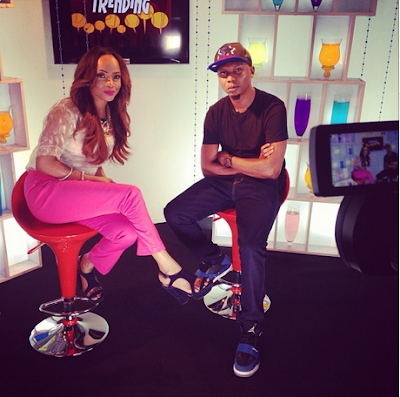 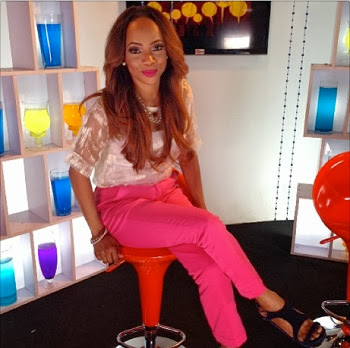