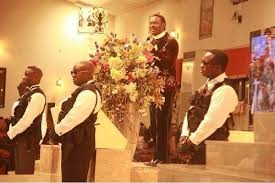 Admitting that he is an unrepentant car freak, Pastor Chris Okotie of
the Household of God Ministries, recently showed off his garage which
is littered with all imaginable posh automobile money can buy.
The cars such as Hummers to exotic models of Range Rover, BMW and Mercedes Benz were all spotted at the garage.
Recall that he recently purchased a whooping N80 million Rolls Royce
Phantom to celebrate his 27 years as a pastor and 30 years as born again
Christian.
Exclusively made for the exorbitantly wealthy, the 2014 Bespoke
Phantom Coupe, Series 2 is the brainchild of Rolls Royce Dubai Brand
Manager, Mohammed El-Arishy, Okotie told Encomium magazine.
See photos below: 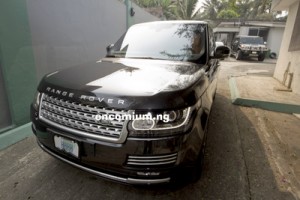 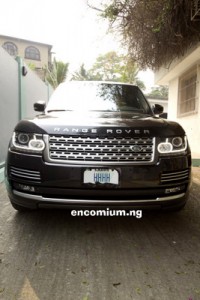 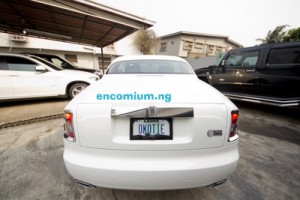 When I decided to worship at Kris Okotie’s Household of God on Sunday
29th December 2013, I knew I was going to have a lifetime experience. I
have heard so much about my namesake and his exploit that I was so eager
to visit his sanctuary today.

For those of you who do not know, Household of God is situated along Oregun road Ikeja Lagos.
Kris Okotie owns all the land and buildings on that street. His Church
shares the same fence with Chris Oyakhilome’s Christ Embassy
Headquarters.

Arriving Church was easy.. I made my way into the Church after the normal searching
at the gate.

The first thing that will hit you, were the bouncers, whose chest were
as huge as bags of cement, even the devil in his wisdom dare not make a
move near that Church at this time.

The inside speaks of the taste of the man, sparkling, well decorated to taste.
Parked outside was not his new Rolls Royce but another Mercedes Benz Limousine with customized plate number.

As it is customary, my seat must be beside a fine babe.
Kai, they were not in short supply at Household. Infact this Church has
the highest concentration of fine babes that I have ever seen in any
Church.
See shape – tall, short, dark, fair, half caste. See catwalk, see
stepping, see mini skirts, see fine steps, see clean smooth skins. See
nails.

I say come see cloth. Brazillian hair – no be that type wey all those Lagos babes dey do under Ikeja bridge.

It was like a competition.
Abeg if you no get designer clothes ,shoes, bags etc no come Household, because, dem go think say you be steward or waitress.

After taking my seat, beside my lovely damsel, I quickly adjusted my lens and snapped some pictures while people were settling down.
Within minutes, a very huge guy that will make Hulk Horgan look like a baby wrestler walked up to me asking me to follow him.

My heart sank, wetin I do now? Who I offend? Who send me make I come
Kris Okotie’s Church? Na today I go see wetin my eyes dey look for.
I asked my latest catch to kindly look after my seat while I followed the guy outside.

On getting there, I was shocked by what the Chief bouncer said.

”CKN ,we know you. We ve monitored you since you entered this Church. We
don’t allow any camera work or taking of pictures in this Church or
premises..  Please let me see the pictures you just snapped, because our
CCTV camera caught you taking pictures”..

Who wan argue with this kind person? I opened my folder and showed him
the singular picture on the folder.. He asked me to delete it..which i
did..

”As I said CKN ,we like your job and what you are doing, just relax and
have a nice service with us at Household, God bless, you can go back in
but no more pictures please”

I was relieved, from that moment. I just respected Kris Okotie and his
security agents, these guys were not being paid for nothing.

On resuming my seat, my concentration now focused on the Service of songs which was being led by a lady.

It lasted for close to an hour before the man of the moment finally came
in, got ushered in and surrounded by six huge bouncers, the type that
will make Goodluck Jonathan’s guys look like kindergartens.

He made straight for the pulpit. Three of the bouncers took their
positions in front of the altar, just like you saw in that picture that
was in circulation last week.

Okotie looks more like a pop star than a pastor. He has not changed one
bit from what I saw of him about ten years ago. His jerry curled hair
was shinning. He wore a golden colored Jacket with black patches over a
black trouser. You will mistake him for one of those Hollywood actors.

Immediately he picked the mic, he went into solo songs.
Okotie does not have a choir or back up singers. He is the Choir, Choir
master and chorister all put in one. His is the only Church I have
visited that does not have a choir.
He was moving from one song to another, for over one hour he didn’t stop.

I was forced to ask the babe beside me if it was a service or Song
festival. She didn’t even bother to answer me. All she was saying was
give it to me, give it to me Pastor, I can feel it, give it to me as she
sang along.

.Haaa, give it to you. give you what I asked..
She took a long look at me and continued in her frenzy, I say give it to me my pastor. Oti o.

This is another level. Since I didn’t want to be left behind as Okotie
was singing, I joined her in saying – Give it to us, give it to us
pastor, give it to us oooooo. Biko give us, give her, give me too
lalalalalala.

The lady suddenly stopped and pinched my hand .Keep quiet, you are not
singing like someone that is in the spirit, she told me.

I asked her what she meant, after all I just wanted pastor Kris to give it to us and you are asking me to keep quiet.

Please give it to you us, infact kill us Pastor, I continued. By now she had kept quiet and was watching me.

The whole church was in a frenzy, estatic ,singing and dancing. All dance steps were on display – skelewu, konkon below, kukere. Name it! Even apala dance join. Ewooooo!

Some were jumping up and down like people possessed by spirit. Some
were even running from one end of the auditorium to another.
The beautiful ones that occupied all the front rows, stood up and were
dancing close to the altar, as if to say Man Of God, we are still
available o.

But Kris Okotie must have been used to it because, he no even look
their side. He was singing in languages that I never understood.
I even saw a popular actress among them.

After over an hour of singing, Okotie now prayed for two nations – Nigeria and Israel. (Why Israel, I don’t know) but I heard those were the two countries he prays for weekly.

After the prayer which lasted for about five minutes, he entered gear two. He kept on singing, singing, singing and singing.
Haba, which kain Church be this nah. No wonder all these people are
trooping here. Tthey came to see Okotie perform every week, definitely
not his preaching.

After he must have satisfied himself, he now settle down to speak on the birth of Jesus Chris and the three wisemen that came to visit Joseph and Mary.

It was easier to understand Patrick Obhiagbon and Wole Soyinka than
listening to Kris. At a point I asked the babe beside me what Kris just
said, she said she didn’t know. I then asked how – how come you were
shouting Praise the Lord.
She told me that I just have to accept what he is saying with open minds without questioning.

The average age at the Church was 40 years.
Kris Okotie has die-hard converts who from all indications are ready to
do anything for him. he is to them a role model of a sort.

The babes are well polished. Not the type you see at most of these orthodox churches like Anglican and Roman Catholic. 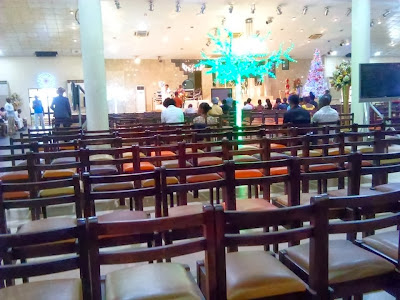 Okotie went on to say- Love without Money is not complete.

According to him, shower a woman with money and see how she will
cherish you for life. To him, love is not enough. It must be backed with
money and big time gifts. According to him, that is why he buys the
latest expensive cars.

When I asked the babe beside me who don dey already squeeze my hand
whether she believe that, she said ofcourse. I can’t go out with a guy
that cannot take care of my needs. Who is not ready to change my car
every other year.

With that I kuku gradually remove my hand, before the girl go collect my car key and I come take leg waka go house.
She asked me if anything was wrong I told her no, that I was just feeling dizzy and would need some fresh air outside.

To add to my stress, Kris Okotie now shared free birthday cakes for people born in different months of 2014 (yap 2014).
He only shared it among ladies; no single guy was allowed to pick a cake.

He also conducted quiz among us, he only allowed women to answer the quiz and each of them were given cakes and gifts.
Of the over 20 gifts Kris Okotie gave away today, no single man or guy was given any.
He said his gifts were ONLY for women.

At that point, I knew I had overstayed my welcome. I told the babe that
I wanted to go and take some fresh air outside; from there I
disappeared and drove off.
It’s obvious that Kris Okotie and his babes still have a lot in common.

If you need fine babes, go to Household..

So here I am starring at my laptop trying to compose a long beautiful 'happy new year' message but I'm experiencing the writers' block, lol.
You see, 2013 was an amazing year, I had more reasons to smile, laugh, be thankful and joyous...thanks to you KFBers...at the beginning of 2013, we had no ranking on alexa, but today KFB is one of the top (not so top top top) websites in Nigeria and it's all God's doing and then YOU!
It  goes to show how amazing you all have been and
how blessed I am to have you. 2014 can only be better!
I
pray for you that you shall have multiple reasons to bless God in the
coming year.
Good news will flood your life and...

The Actor’s Guild of Nigeria President/actress, Ibinabo Fiberesima has just shared beautiful photos of her happy family. She shared photos of her 5 kids -  a little princess and 4 handsome sons.
See photos below:

Toyin Aimakhu deletes her tweets to Aunty Agbaya, shares new photos of herself and hubby

Toyin Aimakhu Johnson has deleted all the angry tweets she shared yesterday.
She's shared new tweets, thanking her fans and promising to be a better person.
She further shared beautiful photos of herself and her husband, Johnson.
See photos below: 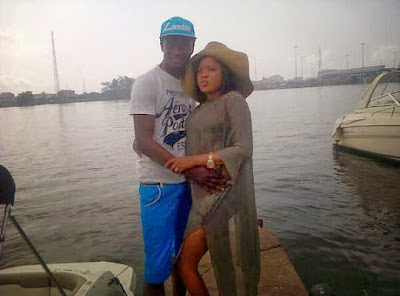 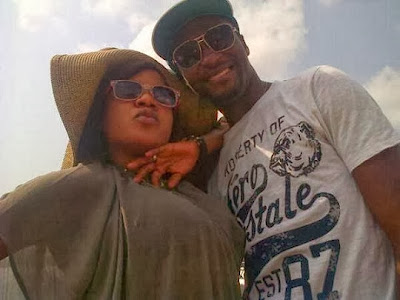 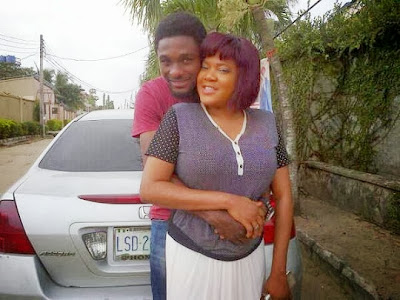