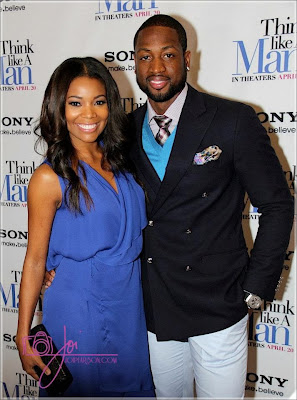 For weeks now,  the blogosphere’s been awashed with Gabrielle
Union/Dwyane Wade love saga (Dwyane had a baby with another lady while dating Gabby) but the American actress is not bothered, she is excited about the engagement and loves him truly.
In a recent interview with Glamour, she said “When I met Dwyane, his “résumé” looked like crap: athlete,
going through a divorce, nine years younger than me…None of
that screamed, “Let’s have a lasting relationship.” Then, after I had a
heart-crushing breakup with yet another immature jerk, I thought, it
can’t be any worse if I date a fetus. Let’s just see what happens.
Turned out he’d been on his own since he was 15. He had wisdom that
comes with facing an insane amount of adversity.

He’s sweet, funny,
honest about his shortcomings. When I put my preconceived notions to the
side, I found someone cool…Dwyane generally gets up before I do to go to the gym, and he’s never
left without kissing me and telling me he loves me. As for me, I am
complimentary to the point where I am almost a little Chester the
Molester-y. I think he’s so delicious. Watching him get out of the
shower never gets old. Never. It’s not like he ever wonders what I’m
thinking, but usually he’s thinking, She needs a cold shower!”

Gabby also advised people to consider getting back with their exes, briefly referencing last year’s relationship hiatus.
“When you’re debating whether to go backward or forward, you have to
look at the original issue. [When Dwyane and I broke up briefly in
2013], it was because of distance and scheduling. I finished filming the
show, then I flew to Vegas right away to start shooting Think Like a
Man Too. I couldn’t take time off, and I missed some quality
togetherness we desperately needed. Over the summer, I reassessed
priorities. I’d always wanted an awesome career with back-to-back
projects, but I realized I wasn’t willing to sacrifice my relationship
for it. Moving forward, I decided my work schedule has to make sense for
our family. Bottom line: If an issue’s a deal breaker, it’s a deal
breaker. If your relationship isn’t something you’re willing to give up
and you can compromise, do so.”

KFB Movie! So I finally watched Rita Dominic's "The Meeting"...she incredibly nailed it!!!