It was a rare spectacle last Sunday at Rhythm Unplugged when hosts American artiste Wyclef Jean and comedian Bovi entertained the audience with their hilarious stunts.

It was undoubtedly a fun night! 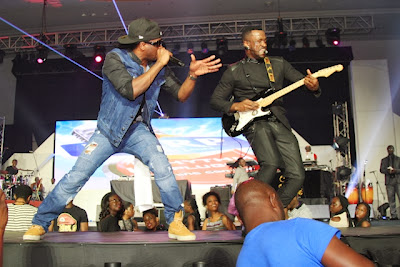 Peter and Paul Okoye’s 15minutes performance wasn’t enough, almost everyone wanted more.
Peter
wowed us all with his dance moves while Paul got so emotional all
through, he fell on his knees on stage while performing
one of their hit songs ‘Omoge mi’.
Paul Okoye said “That song means a lot to me”…
Iyanya’s performance didn’t blow my mind as expected, but for his three sexy dancers who got the audience screaming out loud with their very crazy dance moves. Don Jazzy had fun all through the concert, FLYTIME TV gave him a legend award and while giving his thank you speech he appreciated Wande Coal and D’banj…”you are part of my success story” he said. D’banj was one of the best performers for the night, he entertained well! 2face Idibia’s “You are my African Queen’ performance took the concert to a new high...he remixed the song, the reggae flavour added to it almost made me cry!

Oh I almost forgot to mention Tanzanian singer Vanessa Mdee’s performance. She appeared on stage in a bikini and unfortunately for her, she kept pulling up the bandeau to prevent her boobs from popping out.  She carried out the action repeatedly and it turned some people off.

Why I was told to abandon D’banj – Seun Kuti

‘D’Banj is not our ambassador’ – United Nations confirms

How Dbanj Kidnapped Me For 48 Hours—Seyitan, Rape Victim Reveals