If you are a career driven woman like me, then this movie is a must watch for you…there’s so much to learn from it! 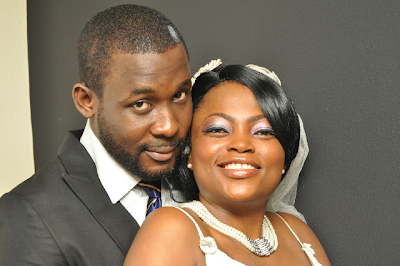 We all know Funke Akindele for her comic roles (not being able to speak proper English) and
razzness in movies, but in Married But Living Single, she breaks out of that role, tries out
something new and does a good job of it.
When the movie actually started, watching Funke Akindele speak “proper English” was kinda funny but I got used to her new role later on, lol, thumbs up Funke!

Married but living single tells the story of an ad executive who has a
problem with work life balance.
Set in present day Nigeria, Kate (Funke Akindele), an ambitious young woman, is
desperate to climb the corporate ladder so fast and attain career fulfillment,
even to the detriment of her family.

Kate is hell-bent on achieving and
affording the finer things of life as she expends a lot of time and energy on
her job. Her commitment to her career makes her lose a grip on her husband, her
child, and her home.

She crowned it all by not traveling with her husband, Mike (Joseph Benjamin) to India for surgery. The Doctor advised that his wife should take a leave and come with
him to hasten the recuperating process, Kate agrees to go with her
husband, but as they are about to travel, Kate
is torn in between traveling to help her husband recuperate and winning
the biggest account ever for her company.
She didn’t even fulfill her promise of picking him up at the airport, come on!!!

Of course this only gives room for
yet another ambitious young woman, Titi (Kiki Omeili), whose own ambition is
fueled by her deep passion to land a good man for herself.

Titi makes herself
available and, naturally, Mike is enamored with her. Before long both are
locked in a steamy hot affair.

There is also Lola a
family friend of Kate’s who tries her best to keep her home against her better
judgment even when faced with frequent emotional and physical abuse visited
upon her by her short tempered husband Patrick (Tunde Olaoye).

Her refusal to
wake up and smell the coffee was her undoing. With no consideration for their
daughter who had to live the through mental and emotional abuse, which will
most certainly live permanent scars in her life, Lola stuck to her guns and
remained in a bad marriage until one morning she just didn’t wake up!

The excellent satiric plot of this movie
touches on all aspects the family—relationship, trust, neglect, and emotional
and physical abuse, as are evident in our daily living.

The movie teaches that the foremost ambition of any couple
should be how to strike a balance between work and family and the trick is to
know where to draw the line.

READ
What Buhari said about young enterpreneurs in agriculture

a) Funke Akindele did a phenomenal job as the ad executive.  She was able
to translate emotions into the screen and you found yourself understanding her
point of view and walking her struggle.

b) Joke Silva is damn so good! She interpreted her role as Funke’s boss well enough, I could feel her!

c) Loved the positive display of African culture through the use of Ankara wears in major scenes in the movie…it was really colorful!
d) The picture quality, sound and background music was perfect!

Thumbs down!
a) The opening award scene should have been shorter and the dancing scene (at the end) was
unnecessary.
b). Whoever casted Joseph Benjamin and Funke Akindele as hubby and wifey did a terrible job, there was no chemistry between them. Funke Akindele and
Joseph just didn’t have any sparks as I didn’t quite get that “oomph” that
would have made your heart sing just watching them.
c) Joseph forgave his wife easily…hello, he was supposed to make her
suffer at least and ignore her for a while but he forgave her just like
that …..oh well!

That said, y’all should see the
movie and learn. The bottom line is we all need to find that balance.

You can watch the trailer HERE.

#JusticeForAlice: The Woman Who Lost Her 7-Month-Old Pregnancy After She Was Brutally Beaten Up By Her Lebanese Boss

KFB Movie! I wonder how much Nse Ikpe Etim was paid to feature in papel’s ‘Blue Flames’…sigh!

KFB Movie: Even Omotola Ekeinde and Kimberly Elise couldn’t save the boring storyline of ‘Ties That Bind’….