Actor Jim Iyke allegedly got involved in a brawl yesterday, at the Crave Café, Adjiringanor, East legon in Accra.
According to the Ghanaian Times, “People were eating at the café at about 5pm when a stout-looking gentleman in a black Range Rover, with a Nigerian number plate arrived. About 20 minutes later, Jim Iyke showed up in his Sports Chevy and engaged the man in a heated argument over $10,000.

“Eyewitness disclosed that it became difficult for those around to separate the two, and at a point, Jim Iyke wanted to get into his car to pull out a gun. The other man left but returned shortly with two policemen, one in mufti and the other in uniform, arrested Jim Iyke and whisked him away.” Ghanaian Times further reported.
20 minutes later, the actor resurfaced at the venue, which created the impression that the case had been ‘settled’ by the two policemen.
Confirming the incident, the Legon Police Commander in a telephone conversation, with the newspaper said “I dispatched my officers to the venue, but those at the scene were reluctant to give them detailed account of what actually transpired, and so they were unable to bring the two men to the police station. 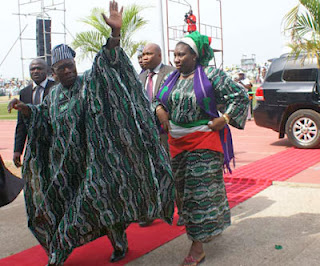 Getting back to my mother, I still remember your beating her up continually when we were kids.
What kids can forget that kind of violence against their mother?

Your maltreatment of women is legendary.
Many of your women have come out to denounce you in public but since
your madness is also part of the madness of the society, it is the women
that are usually ignored and mistreated.

Of course, you are the great pretender, making people believe you
have a good family life and a good relationship with your children but
once in a while your pretence gets cracked.
When Gbenga gave a ride to help someone he didn’t know but saw was in
need and the person betrayed...

In what is turning out to be a season of open letters, daughter of
former President Olusegun Obasanjo, Iyabo, has ruled out further
communication with her father till death, describing him as a liar,
manipulator, two-faced hypocrite determined to foist on President
Goodluck Jonathan what no one would contemplate with him as president.
Iyabo, first child of the former president, started the letter
titled, Open Letter to my Father with a 4th century Chinese proverb by
Mencius which states: “The great man is he who does not lose his child’s
heart.”

“It brings me no joy to have to write this but since you started this
trend of open letters I thought I would follow suit since you don’t
listen to...