“My wife got
sick.  She was constantly nervous because of problems at work, personal life, her
failures and problems with children.
She has lost 30 pounds and weighed about
90 pounds in her 35 years. She got very skinny, and was constantly crying. She
was not a happy woman. She had suffered from continuing headaches, heart pain
and jammed nerves in her back and ribs.
She did not sleep well, falling asleep
only in the morning and got tired very quickly during the day. Our relationship
was on the verge of break up.

Her beauty was leaving her somewhere, she had
bags under her eyes, she was poking her head, and stopped taking care of
herself. She refused to shoot the films and rejected any role.
I lost hope and
thought that we’ll get divorced soon…But then I decided to act on it.
After all
I’ve got the most beautiful woman on the earth.
She is the idol of more than
half of men and women on earth, and I was the one allowed to fall asleep next
to her and to hug her shoulders.
I began to pamper her with flowers, kisses and
compliments. I surprised her and pleased her every minute. I gave her lots of
gifts and lived just for her. I spoke in public only about her. I incorporated
all themes in her direction. I praised her in front of her own and our mutual
friends.
You won’t believe it, but she blossomed. She became even better than
before. She gained weight, was no longer nervous and she loved me even more
than ever. I had no clue that she CAN love that much. And then I realized one
thing: The woman is the reflection of her man. If you love her to the point of
madness, she will become it.“
– Brad Pitt

Denrele Parents Are Going To Hell???

I
want to believe the person who posted this tweet meant it as a joke but
woah!! this is a wayyy too expensive joke. Channel O presenter, Denrele Edun
is well known for his eccentric sense of fashion. A lot of people even
think his manner of dressing is too outrageous for any decent Nigerian
male. This tweeter may have said this opinion because he/she wrote:

Trust Denrele, he wasn’t phased one bit…because he retweeted it and that’s how I got to see it!

Do you find this tweet funny or in bad taste..especially as parents
were mentioned? Besides, what right has any human being to judge who’s
going to hell or not?

Quick update: There were three survivors not two, the third survivor, Kanyinsola Oluwo, is still undergoing treatment, she has difficulty in remembering things. KFB wishes her a quick recovery!
In July, I exclusively brought you the story of how 5 UNILAG students got involved in a fatal accident while returning from the engagement party of one of them, Iyabo.
Three of them died while two survived - Iyabo and a certain Temiloluwa Osindero.
Well Iyabo is now married.
After undergoing treatment for over a month at the Lagos State hospital, she came out alive.
She got married on the 7th of December, it was a low key wedding though (cos of the accident) - only a few friends and family members got to...

Should a mum and her son be allowed to do this??? 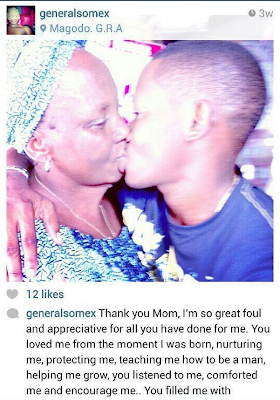