Ladies, this article is in response to the Diary of a hopeless romantic HERE.

If you claim to “love” your man, please act like it. Why must it
always be him that has to initiate every call or text message? Why must
he always be the one that needs to plan every date?

Would it
kill you to send him a cute message that reads, “Hey babe, Just wanted
to let you know I’m thinking about you.”? Would it kill you to surprise
him to a sweet romantic dinner? If you don’t have the money to take him
out, you can simply cook a delicious meal for him. Make the evening
special in your own way.

Once in a while, if you have money, you can stop by the mall and get him a nice shirt or something you think he would like.

A
few years ago, I learned the secret to keeping my man happy:
Whenever I
can, I do sweet things for him. I plan romantic outings, date nights,
couple nights (an evening where we gather with all our “couple”
friends), and I buy him little gifts whenever I can. Not just on his
birthday, but whenever I can. Above all, I gave him the most important
thing to a man: RESPECT. In return, I get treated like a QUEEN. My man
goes above and beyond to put a smile on my face. Making sure I’m happy
slowly became a priority for him. He gets me everything I want on his
own will. I’ve never had to ask for a thing.

Viral message on why you should update your WhatsApp immediately

I know our African
men like to act hard and tough, but deep down inside they just want a
woman who will genuinely love them. Not one who will love with words,
but a woman who loves with actions.

If you have a man who is not acting right, just start loving him the RIGHT way and watch him change.

So ladies, send your man a cute text message today. Surprise him with a cute and sexy message. He will love it.

This goes to the married women as well.

**Disclaimer:
I’m not telling you to spend all your money on this man o. Neither am I
asking you to become his sugar mama. Just pamper him once in a while.**

Related Items:how to please a man, how to take care of a man, PAMPERING my boyfriend, PAMPERING MY MAN

By Tireni Adebayo
A healing river was reportedly discovered in Nachi Oji River in Enugu State, last week.
The healing river nicknamed the “Pool of
Bethsaida” and appears every 20 years.

This year, the pool was discovered by fulani herdsmen who were on their
way to feed their cattle. According to them, they passed the spot where
the water usually came from and there wasn’t any water, but on their way
back they discovered the whole place has been covered with water.

According to the oldest man in the community, the water appears every 20 or 30 years, they first saw
it in 1971. 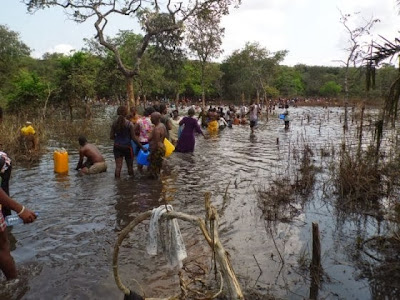 Mavin boss, Don Jazzy clocked 31 yesterday and he got thousands of
good will messages from fans, friends, family and well wishers.

His one time label partner and friend, D’banj also sent him a beautiful message via twittter.

D’banj tweeted “Always a good feeling hanging out with my brother
from another mother. He made me remember what we built, the industry
today, happy birthday brother” AND Don Jazzy replied with "Oshee bro. i just saw ur tweet now. i tell u say cloudy bay o cloudy gan. Thanks a lot and God bless."

By Tireni Adebayo
It’s barely 72 hours since Tiwa Savage and Tunj Balogun got married but they are back to work.
They were spotted at the premiere of the MTV Shuga TV series which held at Silverbird Cinemas yesterday, November 26, 2013.
Meanwhile, NET is reporting that their November 23 traditional wedding ceremony  may have gulped nothing less than N30m. See the breakdown below:

Starting with the invitation cards,
looking at the design and artwork, one would know that a lot of money
must have been put into the design and duplication. 500 pieces of
the package costing an average of N5000 each amounts to N2.5million.
Courier company, Compton Green Express delivered the bag to the...