P.S  Authorities say they have to get in touch with the families first before making manifest public, as plane was chatered!!

The coffin of the late Ondo state ex-governor was found near intact. 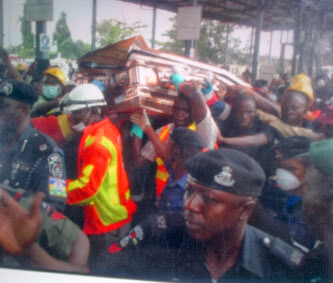 While the plane was about to leave the Lagos airport, Ondo State government officials,
including Governor Olusegun Mimiko, as well as other members of Agagu’s
family gathered at the Akure airport waiting for the corpse of the
former governor. They have moved to the Ondo government house after
hearing of the tragedy.
The black box has been given to Accident Investigation Bureau..
Punch reports that Nine bodies have been recovered and six survivors  so far…
READ
We regret attacks, but must address crimes - Ramaphosa to Buhari
Tags
mic boss segun agau the victims of the plance crash that happened today tunji okunsanya tunji okunsanya and his son
Share
Facebook Twitter LinkedIn Tumblr Pinterest Reddit VKontakte Odnoklassniki Pocket Share via Email Print

Sad! Eniola Badmus mourns uncle and cousin who were victims of the #LagosPlaneCrash (photo)

The past one year without my hubby and son has been awful – MIC boss, Tunji Okunsanya’s wife grants rare interview