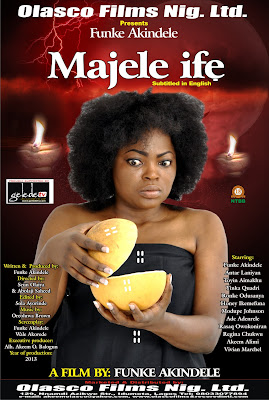 Whoop, our movie of the week is Funke Akindele’s newly released “Majele Ife” and you guys can actually watch it online for free HERE.
Have you ever watched a movie where you release a long sigh at the end and wish you had spent that time you exhausted on the movie for something more important – I bet you have especially if you are a fan of Nollywood movies like me, lol, well that’s how I felt after seeing this week’s movie!

I am not saying the movie is “waste of a time” but the 93minutes movie is not something I will like to watch again. BTW, This review is in response to a readers’ request HERE
Majele Ife was written and produced by Funke Akindele; starring Funke Akindele, Antar Laniyan, Toyin Aimkahu, Yinka Quadri, Ronke Odusanya, Regina Chukwu and others.

One would have thought that Majele Ife (Love portion) will centre on Funke Akindele’s unsuccessful marriage, instead it tells the story of a mother who suffers hard for her children to make it in life and how a strong love portion almost destroyed a young couple’s happy marriage.

The movie starts with a supposed mad woman (she is not mad, she only acts like she’s mad to get food stuffs for her kids and to survive) who scatters the market, steals wares, runs off to her usual corner and changes into a normal attire.

She also acts like a deaf and dumb beggar all in a bid to get money – that scene was actually very touching, made me cry. She has four kids (three daughter and a son). She’s an Ibo woman but speaks Yoruba fluently too.

Fast forward to the future, all her kids are now established – her first son Nnamdi is happily married to Funke Akindele (a very rich neat rich lady), her second child Ronke Odusanya is single and searching, third child Regina Chukwu is happily married with two kids while the fourth child is a young girl in secondary school (she appeared just once!)

This Ibo mum ensured that all her kids married rich spouses…Ronke Odusanya (her second daughter), who is yet to get married has a boyfriend, Lanre, that loves her truly but this mum insists on having her marry a rich man or son of an influential person in the society.

At some point Lanre got a good job with an oil company but in a bid to frustrate their affair, this mum listed “10 Cows, 50 yards of voil lace, 20 microwaves, 8 washing machines and 20 bags of rice…” in addition to the already long dowry list that the family requested from Lanre.

She is also a greedy mum, never contended with what she’s given.
She did the most unthinkable by moving into her first son’s house to spend a few days and almost made life miserable for Funke Akindele, her son’s wife.

Luckily for her, Funke Akindele (the wife) is soft and gentle so she (the mum) becomes the “chief of the house” always mocking Funke Akindele in Ibo language and carrying out actions that will frustrate Funke.
Funke on the other hand will go to complain to her husband who in turn will apologize and take all the blames.

It was fun seeing Toyin Aimakhu and her husband play lovers in the movie.
Toyin on finding out how rich her boyfriend’s cousin (Nnamdi) is, tries seducing him in all the best ways but she fails, lol. Kudos to her for playing her role well, she made me laugh…

So she visits an herbalist who gives her a love portion to add to his meal and she succeeds in getting him!
Nnamdi falls hopelessly in love with his supposed cousin’s girlfriend and becomes her toy – he dare not say no to whatever she asks for.

The heroine (Nnamdi’s mum) visits the mansion again and is shocked to see how sheepish her son has become, to worsen matters, Toyin Aimakhu insults her and almost beats her up, she tells her “I’m not as gullible as his first wife…”
Funke Akindele soon returns from her official trip and finds her home almost destroyed; her husband doesn’t know her anymore even the house helps are more loyal to Toyin Aimakhu than to her.

The heroine decided to seek the help of her spiritual father – an herbalist – who reveals that Nnamdi is acting under the influence of some love portion.
Truth be told, Majele Ife would have been a great movie but for the confusing storyline.
The subtitling was perfectly on point, the
picture quality
was fantastic, all the settings were very colorful and all the characters especially Funke Akindele and Toyin Aimakhu, interpreted their roles well!

All the
transition(s) between the scenes were great – the scenes were not prolonged
unnecessarily, sound track was played at the right time and I loved the Ibo-yoruba culture mix.
So there you go, who has seen the movie too? What do you think of it?

"“I’d love to marry Genevieve, my story is not complete without her” – Dbanj admits

“You are a blessing to this generation”, Funke Akindele’s husband gushes over her