The Nikkai ceremony between the Inspector General of Police
Mohammed Abubakar and his belle Zarha Bunu held on Friday September 13th
in Abuja. while the grand wedding (fatiha) took place at the National
Mosque, Abuja on Saturday.
Many dignitaries, including Vice-President Namadi Sambo, Minister of
Justice, Mohammed Adoke, multi-billionaire industrialist, Aliko Dangote,
and state governors, graced the wedding.
'It is the right thing to do'- Reno Omokri commends Justice Bulkachuwa for pulling out of Atiku Vs Buhari's case

Also at the wedding were two former Head of State, Gen. Abdulsalam
Abubakar, Minister of the FCT, Bala Mohammed and members of the National
Assembly.

The reception held at the ThisDay Dome.
See photos below:

A 92-year-old man in Iraq married a woman 70 years his junior. Muslai
Mohammed, one of the most prominent figures in his village, decided to
get married three years after the death of his first wife, who died aged
58.He said "I remained alone when my wife died, there was nobody to share anything with. I wanted to have a good time, have some pleasure, but there was nothing. Then God brought her to me, for my pleasure. Is that good or bad?,"
Muna al-Jabouri, his new wife, said: "I accepted (to marry him) when I saw his pictures and realised it was my fate"
Click to Continue Reading
News

Funke Akindele has received another title to add to her list; the
actress and quintessential brand ambassador has been appointed a Polio
Ambassador by the Rotary Club International.

“I feel so honored to be part of a charitable cause like this. I
accepted this appointment because polio kills or paralyzes children and
Rotary is committed to ending this terrible disease worldwide.
“I also learned that the world has never been so close to
eradication of polio since the... 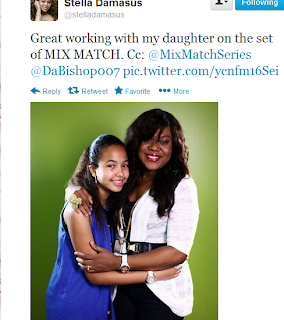 When Stella Damascus posted the photo above on her instagram page
yesterday, many assumed that the younger lady was her daughter.
The actress who’s currently in New York posted the photo with the caption ‘So proud of you my princess. The fastest rising movie star‘.

Many of her fans began congratulating Stella for her daughter’s movie debut.
On realizing the misconception, Stella re-shared the photo but with the caption....

‘This photo has caused a lot of mayhem in the social media and I
am loving it. The world will soon see how silly and gullible SOME of
these writers and bloggers can be. Coming soon‘,