After lying low for months, NSCDC’s Shem Obafaiye has finally granted his first interview.
He has finally disclosed how he felt –  the shame, the joy and the fame that came with his much publicized interview with Channels TV.
In case you missed it, Shem Obafaiye is the NSCDC official that couldn’t tell the name/address of NSCDC’s website (HERE)…that little  mistake cost him a lot though.
See excerpts of his interview theheraldng.com below:
What is your opinion about the Channels Television interview that brought you instant fame?
I have nothing much to say other than to bless God for everything. I
thank God for all that happened; I thank God for my boss, his support
and love. He is a good boss and I appreciate him. As far as I am
concerned all things work well for those who love God and in all things,
the Bible says we should praise God.
The people that thought
they were going to ruin me did not know that they would end up in
announcing my destiny.

In the history of humanity, there had never been
any human being that had instant fame like I did especially in a case
that was meant to end negatively.

My brother-in-law in London is even so
excited about the incident that he promised to assist me make big money
out of this supposed mess. He had already handed the matter to an
agency over there to trade mark “Oga at the Top.” But I just asked him
to forget it.

There is no need for that.
Many of my class mates
are in top positions in Nigeria currently, yet, they said I did not go
to school. I can mention a lot of them here, including the Attorney
General in Lagos State, Ipaye.

But why should I do all that. All
the same, I give all the praises to God. It was not the first interview I
would be having with them (Channels Tv). After that interview we shook
hands and I even gave them my complimentary card. I could see that they
were not really cheerful. If there was any effect, it was on them and
not me. It was the same day I met with Governor Fashola of Lagos State.

Theirs
took place in the morning and I met Governor Fashola later in the day.
Some people believed they were up to something, but I did not know. I
was only being careful with words as a security officer. We apply
caution in all that we say and do. It was a live programme, the whole
world was watching us, so, I did not want to be too free.

'5,000 coronavirus cases to be recorded tomorrow' - Lagosians react to the video of overcrowded BRT terminal

But
like I said, I thank God for everything. I blame nobody for anything; I
see everything as an act of God. They believe they would use it to
destroy my destiny but God turned everything around for me, for the
better.

How did your family take the development?

The day
of the interview, 16th of March, 2013, was the day my father was buried.
It was as if it was designed to destablise me on the day of the burial
of my father, but it was not so. It was three or four days after that
they apologised and said it was not meant to embarrass me.

Channels
felt bad because it backfired. Anybody that wants to go for an
interview in Channels will be very skeptical now and henceforth. I just
felt it was my time for divine announcement, so I did not take it the
way they thought I would take it.

In fact, when I saw the
T-shirt, I wanted to buy one. Some had thought that my transfer to
Ibadan was a demotion, but they are wrong. It is not. They also claimed
that my wife went to Channels over the issue. The question I asked was,
to do what? She did not. The whole thing has only turned around to be
God’s glory in my life.

What is your philosophy of life and how did it apply in the case of “My Oga At The Top” case?

My
philosophy of life is to impact positively on this generation. I want
to leave a legacy, a good and worthwhile legacy behind that will not
make my family live or walk in fear when I am gone. I want to sustain my
good name; and that is what I preach to my staff every day.

I
tell them to be open-minded; be determined; do what you will do with
your best ability whether people are there or not. Note that there are
people watching you and your work will speak for you when you are not
there. This is what I always tell them.

What is the lesson to be learnt in your “Oga At The Top” issue?

Everyone should identify a lesson out of the whole saga.

By Tireni Adebayo
A teacher from Northern
Ireland got a wedding day fit for a princess when she tied the knot with the
Crown Prince of Lagos in County Armagh yesterday.

The royal couple are due to travel
to Monaco and then St Tropez for their honeymoon, but plan to set up a
base in Northern Ireland.

Lool, you all know Konga right, the online store that sells almost everything...well, M.I Abaga is presently not finding their adverts funny.
If you are a frequent youtube user, you will understand M.I's complaint more, you know whenever you click on to watch a video, an advert pops up and most times it's a konga ad!
Well, M.I thinks the ad is very annoying and 90 of his twitter followers agreed him - Seriously, it is super ANNOYING!!!
See his tweet below:

So, are the ads really annoying or M.I is just being er--M.I 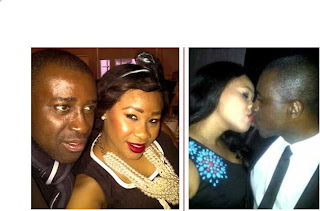 Popular television presenter and the host 'Who
Wants To Be A Millionaire', Frank Edoho is having increasing spat with
new wife, Sandra.
And it's all due to the very flamboyant lifestyle Sandra lives.

Insiders revealed Sandra relishes in unique leisure experiences that comes at high cost.
She is said to prefer constant vacations abroad, peculiar jewelleries, attires and related lifestyle materials. And the urge to constantly fix and refix their Victoria Garden City home.She reportedly has a chunk of hangers on- particularly family that
relies on her, then the need to give her child from a previous
relationship a...