The leadership of the Deeper Christian Life Ministry has suspended the
son of the General Superintendent of the church and his wife, John and
Love Kumuyi from carrying out any activity in the church over their
recent controversial wedding in Jamaica.

This is coming after the couple tendered a letter of apology.

The church says it decided to place the couple on suspension to give them time to pray and seek forgiveness from God for their action and was announced by Pastor Philip Oluwi, a key leader in the church.
Oluwi, certainly is acting on the instruction from the General
Superintendent of the church, Pastor William Kumuyi, to suspend the
couple for the embarrassment they brought upon the church during the
wedding, emphasizing that the standard of Deeper Life regarding wedding
and moderacy had not changed.

“Hence, deviation warrants the displeasure and frown of God and the
leadership of the church. John and Love are now under discipline,” Oluwi
announced to the entire congregation, an action that helped to calm the
nerves of many Deeper Life faithful.

However, P.M.NEWS investigation revealed that John and Love’s wedding was not conducted in a Deeper Life Bible Church.

It was also not conducted by pastors from the church as Deeper Life
Bible Church in Jamaica has not been licensed by the country’s
government to join couples in wedlock, according to the laws of Jamaica.

The wedding was taken to another church where the ministers in the
unnamed church conducted the wedding and joined them in holy matrimony.

Besides, Deeper Life leaders that came from Nigeria were said to have
disapproved of the earlier gown Love was to wear for the wedding, while
another was hurriedly sewed the night before the wedding.

Church leaders were said not to have seen the new dress until the couple
was marching into the church and by then, it was too late to take any
action as the wedding was not conducted in a Deeper Life church. 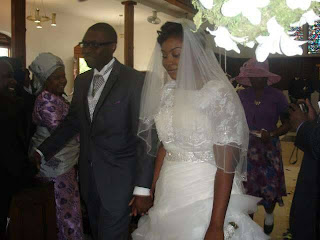 Days ago I told you guys that John Kumuyi had tendered a letter of apology to the Deeper Life Church, well he truly has! During a programme last weekend at one of the Deeper Life Churches in
Lagos, the host pastor read out a letter of apology from John and Love
Kumuyi addressed to the overall Church Secretary and directed to the
church leadership and members, stating that they took full
responsibility for any controversy arising out of their wedding.
Read the full text of the letter and see the video (from 3.00) below.

John and Love Kumuyi, write to express our deepest and most sincere
apology for the turn of events, that have resulted on...

The Academic Staff Union of Nigerian
Universities has accused the government of not following up on an MOU
to pay lecturers an earn allowance, and has thus declared a nationwide
strike.
The ASUU National President, Isa Fagge, told journalists of the
development at a news conference via telephone at the University of
Lagos.

He said that the decision to have the strike was reached at the National Executive Committee (NEC) meeting of ASUU held at the Olabisi Onabanjo University, Ago Iwoye, on Monday.
Mr. Fagge told journalists that the strike, which takes immediate
effect, will be comprehensive, total and indefinite’’. He said that the
action was as a result of the inability of the Federal...

Oh no, this
is so sad! I heard about the story this morning but I didn't blog it
because the details were sketchy, now I have the full detail of the
accident - contrary to the reports going viral, not all of them died, 2
of them are still alive - the other three died on the spot!

They were involved in a very fatal car accident along
international airport Road in Ikeja, Lagos.
A close source who witnessed the incident told me, the students left from
their off-campus, Emerald to be precise, for the engagement party of one
of them (Iyabo)- she recently got engaged - and her friends/cousin
decided to celebrate with her (photo above). The engagement party went
Click to Continue Reading