Do you guys remember Dekunle Fuji of “lelelelele, mo like Jesu gan, mo nife Jesu gan…” that beautiful gospel fuji song. Well, in the search for greener pastures, the popular Nigerian gospel fuji musician, Dekunle Fuji is now a certified nurse in the US.

The former Storm Records artiste who
several years ago was a toast in the gospel scene is now based in the US
State of New Jersey where he went through a nursing course to become a
qualified nurse, NET reports.
The
former artiste had left Nigeria for a show in the US in 2011. Getting to
the US, Dekunle began considering the thought of settling down in the
States. In no time he quickly applied for a nursing course and finished
with the course a few months ago.
Prior to his sojourn in the US, the musician (although does not
like to be referred to as a gospel artiste) had joined the Nigerian
Police Force even before moving to the US.
‘Dekunle had joined the police force
where he was appointed a senior officer because of his qualification. It
just so happened that his travelling came through just about the same
time the Police force had employed him’, the source said.
We also discover that in the US, the
musician turned nurse is still taking up shows in churches and crusades
where he gets paid up to about $5000 (N790000) per performance.
It is not finished - Nigerians insist they must get a better Nigeria after Buhari's speech 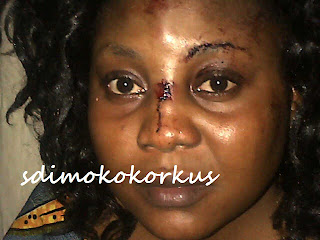 Contrary to the reports that went viral - that veteran
movie director/producer, the highly respected Tade Ogidan beats
his wife and recently injured her on her forehead - Tade Ogidan in a telephone conversation has denied the accusations and he has this to say: 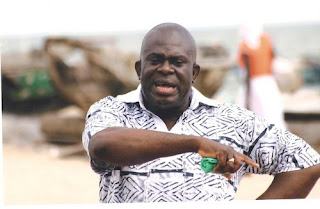 "Thanks for your concern. I just got back to Lagos from a trip abroad.
It was Friday night in London that my phone started to ring off the hook
with the news of this publication.
Anyone who knows me near well enough or even well enough will know that I
CAN NEVER HIT A WOMAN. It just cant happen! If anyone ever upset me, I

Poor Osuofia, lol! The photo was taken on a movie set...see another photo below:

SEE How Nigerian Celebrities Are Killing Themselves 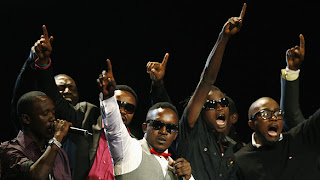 Apparently basking in the euphoria of a new status, many Nigerians in
showbiz throw caution in the wind in the process of “living it up”.
These days, hardly does a month end without news of someone in Nollywood
or the Music industry, getting involved in car accident or public
brawl...This comes as no surprise, especially to those who are
in the know of the background of today’s stars.
Most of them, even in
wildest dreams, never thought they would attain their current standing
in the society. In fact, not only do they talk about the rise to fame in
interviews, they also author books and record songs on it.

It is
worrisome that the mints these guys stack in bank accounts have
overwhelmed them, so much that some can no longer think properly....