I told you a few weeks back that Mama G is planning big for her son’s wedding, well, the Nollywood actress is presently in London – #ShoppingThings – making last minute preparations
ahead of her first son’s wedding holding on Saturday, May 25.
Her son, Uchendu Ozokwor will exchange marital vows with his love, Gloria
Nweze in a glamorous event scheduled to be witnessed by a couple of
London-based Nollywood personalities and Nigerian socialites in Queen
Elizabeth’s country.

Why we suspended AIT and Raypower - NBC

The joyous mother broke the good news to her teeming fans and
admirers through a popular social network site over the weekend.

“Fighting hard to maintain a life working and preparing for a wedding.
Thrilled to announce that my son is getting married. Waiting for a
wedding is like waiting for a sunrise. Knowing it’s coming yet I can’t
wait,” she happily tweeted.

In another statement obtained by EE, she adds, “I am in love with
the couple. I thank God for them and my family. Although the wedding is
taking place outside the shores of Nigeria however, Igbo customs and
traditions shall govern the marriage rites.”

Ozokwor lost her husband a few years ago to a terminal disease. Since
the death of her beloved hubby, Mama G as she is fondly called has
never looked back as she continued to soar like an eagle in the
make-believe world. The proud and caring mother of four, also has an
adopted child among her family members.

The truth of the matter: M.I Disses Olamide In #Chairman song

You all know M.I's  hit#Chairman song, well there are claims that the song was released to counter a diss
from fast-rising indigenous rapper Olamide.
You will recall that in one of Olamide’s songs,
he made mention of a certain ‘chairman’ in his song, Owotabua, telling
him to take it easy and calm down...thus it was assumed that M.I responded to the diss via his #chairman song!
Well, M.I  has debunked the rumour, calling it
‘cheap and impossible’. M.I’s publicist, Oma Areh of Wild Flower
PR, says it was impossible for MI to spend about
N10m on a video and so much energy on a song to respond to a diss.

She said, “MI spent about N10m on the
video. He shot it in Los...
Click to Continue Reading
News

Look! Meet The Boy Who Changed The Colour Of His Skin

The boy above made some vital
points...very vital points!

Nigerians blast El Rufai Over “My Daughters Are Unemployed Speech” 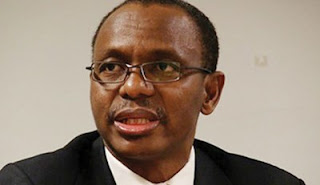 Former Federal Capital Territory minister, Mallam Nasir el-Rufai, on
Thursday bemoaned the spate of unemployment in the country, saying
despite his connections, he had yet to secure jobs for his two
daughters, who are both holders of Masters Degrees.
"Forty-two per cent of Nigerian youths are unemployed. I have two
daughters with Masters Degrees and they are unemployed. They have been
at home for more than a year and I cannot get a job for them." he said.
Apparently, the speech did not go down well with some if not all Nigerians, yeah I read through all the hate comments on the major sites that published the post. Here are some of the reactions via comments on blogs/sites to the issue...let's see...