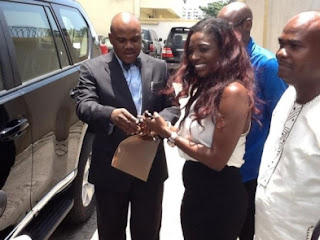 I am happy for Tuface and Annie Idibia on their marriage, any couple that decide to go into the future together deserve only well wishes. However, I am disappointed that are accepting their traditional wedding
gift which is akin to going along with the Akwa Ibom governor to
deplete state funds for their personal gain. I guess one can defend
their action and say that’s the only way ordinary Nigerians get their
share of the National Cake, but at the detriment of who?
Also, Tuface is not an ordinary Nigerian, he makes millions of naira
from being a musician, a lot of it from the pocket of Nigerian masses.
Does he really need this state handout in the form of a jeep? Earlier,
he said he was yet to decide
on whether to accept the gift. I guess we now know what his decision
is. But, what do I know? In the press release to justify and defend the
actions of the governor, this same commissioner in the picture said;

That looking carefully at the surrounding events in
perspective, Mrs. Annie Idibia, nee Macaulay is a daughter of Akwa Ibom
State and the gift of a Prado SUV from her governor is only a gesture of
love and goodwill. Her resolve to stand by her husband on his journey
right from his days of youthful beginnings to stardom even in the face
of challenges was commendable and a true attribute of the Akwa Ibom
women.

Really? Really? And what about the thousands of other Akwa Ibom women
who do that and more? Or those are passing through university to make a
butter future of their own? Or the ones married who want to start
businesses to support themselves? Have they got a Prado Jeep and
N3Million from the government.
Well, maybe Tuface and Annie Idibia will pass on the car to charity 🙂
Myne whiteman

Hehe! National identity number and 666 mark of the beast!!!

Piers Morgan asks who the 'Oga At The Top' is?