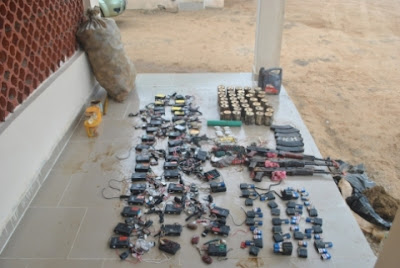 There is this popular yoruba proverb that goes thus: “Kokoro Ti N Jefo, Ara Efo Lo wa”, that is, “if you check well, you would find that it is your most trusted person that is doing you”…Imagine, this policitian oh…

Soldiers from One division of the Nigerian
Army on Tuesday discovered a bomb making factory at a house located at
Sabon Birni Road Kawo in Kaduna North local government area of Kaduna
state, following a tip off from some members of the public. The building is located few meters from the one Div army headquarters. (See photos below) The
Commander one division internal security force, Brigadier General Tagbo
Chuks Ude who briefed newsmen on the raid said the discovery followed a
cordon and search operation carried out in the area by Soldiers from
the internal security force at about 5.30 pm on Tuesday. The
owner of the house, one Husseni Dei Dei, a onetime ANPP chairmanship
aspirant in the FCT, two women and five children all occupants of the
building were arrested during the operation. Brigadier Ude said
the building housing the bomb making factory will be demolished in line
with Army’s resolve to deter terrorists from their activities.
During
the operation, six AK 47 rifles, one light machine gun, 20 seven loaded
and 17 empty AK 47 magazines and 58 rounds of 9mm ammunition were
recovered. Other weapons recovered during the operation include 275
rounds of 7.62 mm NATO ammunition, one loaded light machine gun, nine
prepared cans of improvised explosive device (IED), one reel of firing
cord and 125 pieces of detonator. The recovered dangerous weapons were buried inside soak away pits, and ground within the building.
Source: Channels Tv
Tags
bomb factories in Nigeria bomb factory discovered in politician's house houses of Nigerian politicians Nigerian politicians

These five top Politicians will spend their Christmas in Prison

Akwa Ibom: State where commissioners, others, kneel for Akpabio’s wife

Big Story: How ‘Lawmaker’ Lawan Farouk got into trouble!!!