A photographer at the Eti-Osa Local Government, Lagos, Bolaji Madamidola,
was allegedly beaten to a coma by a policeman during a demolition exercise in
Ikoyi area of the state last Wednesday.
The victim is an occupant of a building which formerly belonged to a
former Managing Director of Oceanic Bank plc, Cecilia Ibru but the building had
been acquired by Asset Management Corporation of Nigeria and sold off to
another individual. 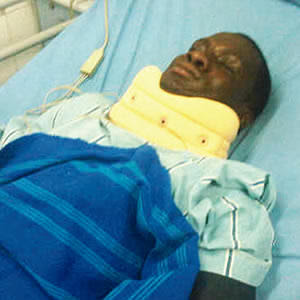 So, some policemen stormed the building to eject the occupants out,
Madamidola while trying to salvage some of his property was allegedly beaten up
by one of the policemen.
The lawyer to the occupants of the building, Okwarauba Nastor, said the policemen
were shooting indiscriminately in a bid to scare off the occupants of the
building.
He said “The policemen came with guns and started shooting into the air
sporadically so that all the occupants of the building will run away. He
(Madamidola), on hearing that the policemen were ejecting them (tenants), he
rushed back to the house.
“As he ran into his apartment to salvage some of his things, one of the
policemen later identified as Sergeant Raimi Aliyu, picked up a sledge hammer
and struck the victim with it, causing him to faint immediately.”
Nawa oh…this is not fair!
READ
Tragedy strikes, many dead as Apapa boat mishap on Sallah day
Tags
bolaji madamidola Policeman beats tenant with hammer in Lagos policemen and lagos citizens tenant beaten with hammer in lagos

It's A Big Whale!!! Lagosians butcher Whale washed up on Lekki Beach

Reasons Why "My Oga At The Top" Jokes Must Stop