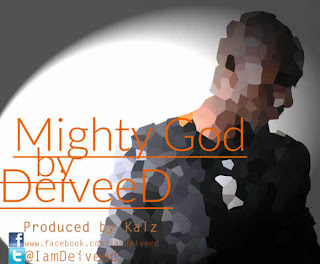 Deiveed —> Adeyemi David Adekunle is a Recording
Artiste, singer and song writer who hails from Osun StateDeiveed began what was to turn into a
glorious Gospel music career at the age of 16.
Deiveed
won the last edition of the Naijatins MTN “Next To Blow” Online Music
Competition for Upcoming Artistes in December 2012 (a competition that
was decided by votes).
As part of reward for winning the
competition, Deiveed was handed a production/recording deal by the
organisers of the competition, Naijatins.
David’s first official single of the year titled “Mighty
God” which dropped some minutes ago was inspired by sheer awesomeness of God’s works in his
life…he intends using the song in returning all praises
to God…awww!
The song was produced by Kalz (A very
intelligent and creative producer who also happens to be Deiveed’s long
time friend) and was recorded at Mavericks Studio, Surulere (the
official Naijatins Studio). Oya press play….#don’t dull!
Download Mighty God here

The "-ish" between Pastor Adeboye and Kemi Olunloyo