Ah ha! This is so ….unbelievable, i can’t believe that such ‘backward traditions’ are still in existence in today’s world. 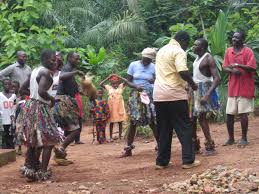 Just heard now that there is a community in Cross River – Ubang that forbids its’ women from speaking the same language with their men. In other words, in a home, the husband must speak a different
language from the wife, while a man must find a way to communicate with
his daughter and vice versa.
To some, it might be a mystery, to others a fairy tale, because you
would not believe or have imagined that a community in Nigeria, which
prides itself as the only one in the world have its people speaking two separate languages, the men speak separately from the women.
See how channels tv reports it:
“All over the world, differences exist between man and
woman only by their sexes, but in the Ubang community in Obudu Local
Government Area of Cross River State the dissimilarities have
transcended genital organs, as the men have different words for
communication from their women counterparts.
The beauty of it is that the man and the woman understand each other
without inviting an interpreter, but the law is, the man must not be
caught speaking the same language of a woman, vice-versa.
Some of the residents in the Ubang community, appear to be proud of
their ancestral heritage which according to them is as old as the
community itself and it is second to none in the world.
According to them, this tradition, which they cannot challenge or
change, forbids women from speaking the same language used by the male
counterparts, is like a law which the people must obey at all costs.
The Village head of the community, Joseph Aleinyang said in spite of
the language dissimilarities amongst his kindred’s Ubang since its
inception has remained one of the most peaceful in the state, promoting
communal living and are also the food basket of the state in terms of
cocoa and other agricultural produce, but has remained in abject poverty
due to its bad road network to transport its produce for better sales
to the outer communities.
Nawa oh! It is so ridiculous…what do you think?

Dangote Is Getting Richer, Nigerians Are Getting Poorer