This is very funny, really. On Tuesday, students of the Nigerian Law
School Bwari Abuja played out the biggest drama ever, all thanks to a
cash gift of N1m given to them by our First Lady Dame Patience.
Dame Patience Jonathan had visited Bwari for the convocation of graduands from her NGO, A. Arueba Foundation. After the convocation, she decided to pay an unscheduled visit to the
Bwari campus of the Nigerian Law school, Abuja to see two of her adopted
daughters.
But the visit which was meant to be a private family affair eventually turned into a PR stunt and money sharing bazaar.The first lady was ushered into the female block C hostel
where her adopted daughters reside at about 6pm. While there, she spent
a considerable amount of time chatting with them and their flat mates
after which she started sharing money.
The room mate of the First Lady’s adopted daughter Ine (a graduate of
the University of Calabar) reportedly got N300,000 while her other two
flat mates got N250,000 each.
The chief porter of the female hostel was not left out of the naira rain
as he went home richer by N100,000 from the first lady’s bazaar as she
was leaving the hostel.
The excited female students who could not contain their joy were seen
clicking their cameras, blackberry, ipads in photoshots of the
philantropist First Lady and giggling excitedly as she embarked upon an
inspection tour of facilities around the Block C Female hostel.
The high point of her visit was the introduction of the Student
Representative Council President, Mr Frank Urthur by the First Lady’s
adopted daughter.
The benevolent first lady did not waste any time in doling out one million naira to the president to be shared amongst the students.
But rather than declare the correct amount given to them, the SRC
President Mr Frank Urthur (a close confidant of Governor Gabriel Suswam
of Benue state) wanted to play a fast one on the students by informing
them that the first lady gave them N500,000 and not N1 million.
This infuriated the students and they insisted that the money should be counted in their presence.
Before one could say Jack Robinson, two volunteers stepped out, took
possession of the wads of naira and counted it in the presence of all.
Lo and behold, the cash gift was N1m and not five hundred thousand as was declared earlier by Mr Frank.
At this juncture, commotion and pandemonium broke out, with the aggrieved students running haywire in a bedlam of confusion.
They booed Mr Frank Urthur, singing derogatory songs like “Frank you are a thief! Frank Ole, for him.
The students also descended on him but he was rescued by the timely
intervention of the police men stationed within the school premises.
The students thereafter had an impromptu meeting where it was agreed
that a vote of no confidence should be passed on Mr Frank Urthur.
Students have also commenced moves for his impeachment.
Here are more pictures of our First Lady at the school. 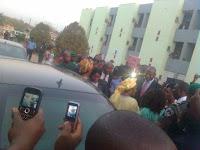 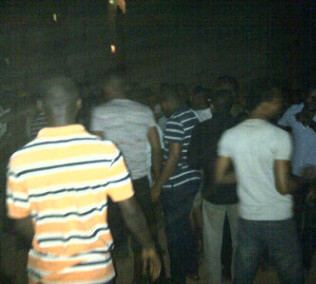 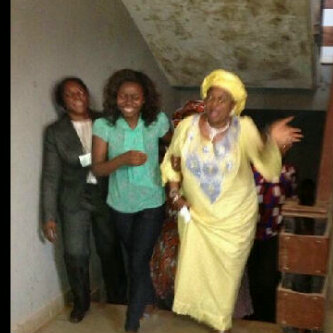 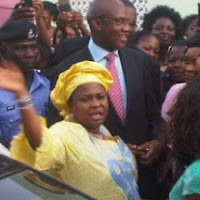