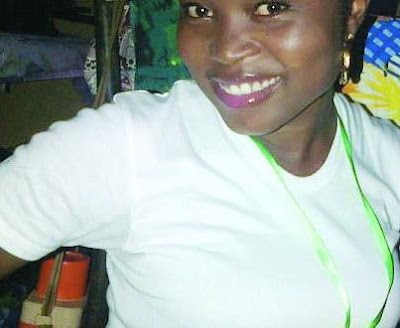 Faith Nzube Enemuo Batch “C” member of the National Youth Service Corps
(NYSC) has been reported to have drowned in a river in Ikom Local
Council where she is currently serving.She is a graduate of
Social Studies from the University of Abuja. She came along with her
co-corpers to play handball at the bank of the river. But, a few minutes
into the game, she went missing.
There
were about 10 of them, who came to play handball on the dry land near
the Ikom River. One of them suggested that they should move closer to
the river, but the suggestion was opposed by other Corps members. The
ball fell into the river, an eyewitness said, and the late Faith offered
to fetch the ball, which was moving faster away from the shoreline.
The late Faith stood close to the river for a
few seconds, after which she dived to bring the ball out. Her
colleagues watched in excitement as she swam close to the ball. But, in a
moment, she stopped and started waving her hands. They thought she was
still playing, until they didn’t see her again on the water surface.
When
her colleagues realized what was happening, they signaled to the
villagers, who were swimming in the river. After 10 minutes of frantic
search, the rescuers could not find the girl. More villagers offered to
help with canoes and fishing instruments, but they could not get her.
Two days later, the late Faith’s body was found on the Okuni Beach in
the neighbouring village.
May her soul rest in peace!

24-year-old UNILAG student sells his kidney to his Dean...to graduate with a FIRST CLASS