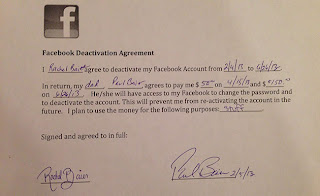 A 14-year-old girl, Rachel made a deal
with her father, Paul…that is if Rachel stayed off of Facebook for five months,
she’d find herself $200 richer. To make sure everything was
above board, a contract was signed by both parties. Rachel will get $50
if she resists the call of Facebook until mid-April. She’ll score $150
more if she makes it to June 26. She has given her father her password,
which he has changed to prevent her from accessing her account.
According to the contract, Rachel intends to use the proceeds for
“stuff.”
Rachel
originally asked for $70, but then, like an expert negotiator, she came
back and asked for $200. “When she realized it would be for five months,
she wanted an amount that would really excite her,” Paul explained.
Paul
hopes this may start a trend. “I’ve realized that she is part of a
generation of kids that has grown up on Facebook. She’s been on it for
two years full time. This is two years of 24/7 teen discussion of
friends, clothes, parties, etc. They can’t get away from it. I’m proud
she recognized the benefit of a hiatus. She plans to go on using it
after the contract ends.”
The contract expires on the last day of school. So far, she has no regrets.
READ
Nigerian man, Bola Omoyeni dies of coronavirus in the UK | Photos
Tags
dealing with facebook facebok passwords facebook addiction Father pays daughter to quit facebook