Star actress, Mercy Aigbe made her debut in 2006 in a flick
entitled, Ara and six years later, emerged a major force to
reckon with in Nollywood/Yoruba movies. Aside being an actress, she is also a scriptwriter and movie
producer….she produced the popular Yoruba comedy flick, Osas…
Born to a family of five, Mercy is the second child of the family.
She has revealed that growing up was not a tea party as she received a lot of
flogging from her dad who wanted her to study Accountancy. 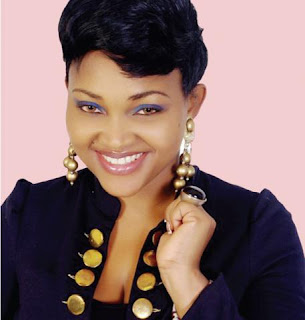 Unlike Fela who once disclosed that he got over 300, 000 strokes of the cane from his dad, Mercy says “I can’t count. All I can tell you is that I was thoroughly flogged
by my father. He did not use wooden cane. He used electric wires twisted
together. Growing up was fun but my father was always flogging me
because I was very stubborn. I always wanted to have my way…The good thing about it is that my father actually wanted to instill
high moral standards in us. So, whenever he flogged me it was either on
my bum or my hand”.

On her journey into acting she said “My dad believed that acting was not
the way for any responsible child…For my dad, acting should just be a hobby and not a profession. In
fact, he did not want any of his kids to be actors so, he forced me to
go to Ibadan Polytechnic to study Accountancy. I am not trying to praise
myself but I was a very intelligent kid; I was very good with
mathematics and sciences so my dad believed I would make a great
Accountant.

“Along the line, I discovered that I had this outgoing nature and I
loved acting and loved meeting people and so eventually, instead of
going back to study for my HND, I went to UNILAG where I studied Theatre
Arts.”
And you could guess her dad’s reaction. He was livid and practically
disowned her.
“He did not take it likely. He was broken hearted! He was so mad at
me. To show that he meant business, he did not pay my first year’s
school fees. I had to beg, I had to buy a goat to appease him according
to tradition. I had some of my uncles come over to beg him and later, he
came around and said, ‘anyway, in Nigeria, it’s not what you study that
determines the job you do. My daughter, you can study Theatre Arts and
still be my Accountant someday.’ He eventually gave me his blessings.”
Mercy got her first big break when she acted in Wemimo Olu
Paul’s Ara, a movie that transformed her career and ever since, she has
never looked back.
She is happily married to a loving husband and blessed with two
kids.

Question Of The Day: Where is Stella Obasanjo's son?

See why mercy Aigbe is the most fashionable yoruba actress