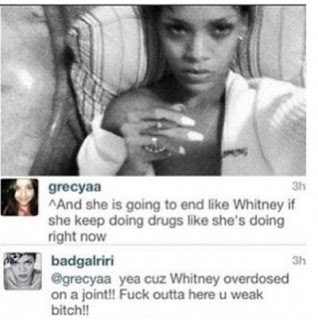 A few days back, Rihanna posted a photo of herself smoking a joint on her instagram page @badgalriri.
The post generated 196443 likes and almost 6000comments. One of such comments was that of a fan, Greycaa who stated that “RiRi would end up like Whitney Houston if she keeps doing drugs like she’s doing now”. The comment further generated some likes and controversies.
On reacting to the comment, Angry Rihanna, called Greycaa a ‘Weak bitch’. See for yourself…do you think Rihanna is really going to end up like Whitney Houston?

Edo Polls: What next for Oshiomohle?

Remi Tinubu narrates how trauma led her to Christ