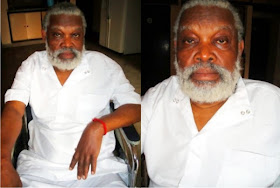 For some time now, the Nollywood actor had been suffering from stroke; he died last night at a New Delhi hospital in India where he was receiving treatment.
Elebuwa was well known for the role he played as Andrew in a campaign by the Federal Government in the 80s to discourage Nigerians from fleeing the country.
The immediate President of the Actors Guild of Nigeria, Mr. Segun Arinze, confirmed Elebuwa’s death on the telephone.
He said, “He fought gallantly. He was a great actor. We all called him Andrew but unfortunately, he has checked out.
RIP Elebuwa…