His name is Jose Mujica and he is the world’s poorest president! He is the president of Uruguay, lives on a ramshackle farm and gives away most of his pay.
Unlike most presidents who have tight security round their ‘buoyant and exotic home’, Mujica has only two police officers and Manuela, a three-legged dog, to keep watch outside his home.
According to BBC, President Mujica has shunned the luxurious house that the Uruguayan state provides for its leaders and opted to stay at his wife’s farmhouse, off a dirt road outside the capital, Montevideo.
The president and his wife work the land themselves, growing flowers.
“I’m called ‘the poorest president’, but I don’t feel poor. Poor people are those who only work to try to keep an expensive lifestyle, and always want more and more,” he says.

“This is a matter of freedom. If you don’t have many possessions then you don’t need to work all your life like a slave to sustain them, and therefore you have more time for yourself,” he says. 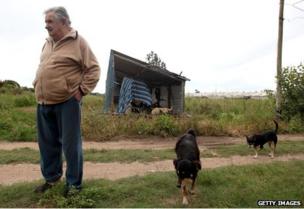 “I may appear to be an eccentric old man… But this is a free choice.”  wow, isn’t this amazing? Can any Nigerian president or politician live this way? despite the world-class presidential home he has got, he lives and rules from his farmshed!!!