Nawa oh! When the issue of Blackberry started in Naija, Nollywood immediately released the movie ‘Blackberry Babes”…now they have decided to produce a movie on the ALUU4 incident. According to Local media reports, a movie on the jungle justice killings of 4 Uniport students that happened less than 2 months (October 5th) is already in the works. 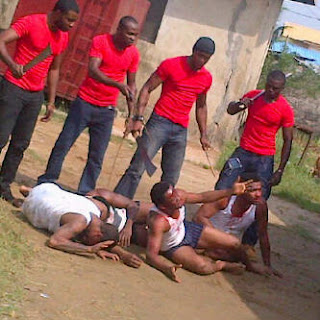 The killings, popular referred to as the Aluu4 killings hit the nation hard and brought to light the issue of jungle justice in Nigeria.
As of yet, the 13 suspects arrested in connection to the killings have not been convicted, and a full official statement of all that happened is yet to be released.
The movie will  be produced by Simony Productions, the Idumota marketers that also did Blackberry Babes.
Based on this information, one has to wonder exactly what the folks that have decided to make this movie will be working with. Have they contacted any family members? Did they do their thorough investigation as to what happened? Have they spoken with other students in Uniport or talked to eye witnesses? Did they visit the location where this happened? Will the proceeds from this movie aid in anything at all?
I really don’t think the movie should be produced…what do you think?

Governor Uduaghan replies Sanusi: You are wrong, sacking them will promote unemployment!!!

An Evil Spirit is behind Nigeria’s NEPA problems: Power Minister

EBUKA OBI UCHENDU, CHIDI OKEREKE, DANIEL ADEMINOKAN GIVE A THUMBS UP TO THE SET-UP MOVIE BREAKING THE NOLLYWOOD STATUS QUO!

Wickedness: Another victim burnt to death for stealing a Necklace in Warri

Women of nowadays know nothing about love – Nollywood actor