Uh oh! Rob’s sisters have threatened
to kill Robs if he takes Kristen back!
While fans
may be rooting for Robert Pattinson and Kristen Stewart to get back together, his two sisters reportedly haven’t jumped on that bandwagon yet.
Lizzy and
Victoria Pattinson are outraged about Kristen’s affair and are strongly urging
him not to take her back, according to a new report. “Robert’s sisters were
fuming with Kristen for hurting their brother in the way she did”
The report
further read “Lizzy and Victoria feel terrible for heartbroken Robert,
especially because of the embarrassment that was caused by the manner in which
the affair was exposed. They’ve told him that there’s no way he can take
Kristen back after what she did to him.” In fact, Rob’s two sisters are
reportedly totally unforgiving towards Kristen, 22, and are hoping he embraces
his new life as a single man! 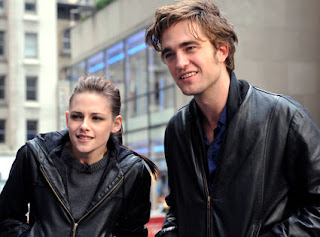 Meanwhile, Kristen is still being bashed online after her affair
with Rupert Sanders. Kristen Stewart‘s wholesome image was shattered after her
affair with 41-year-old Rupert Sanders was revealed. And nearly six weeks after
the scandal, many upset fans have continued to attack her on Twitter! While
Kristen’s affair came as a surprise to many of her fans, it makes a little more
sense now after hearing about her parents, John and Jules Stewart, split.
There are speculations that her parents divorce who were married for 27 years could
have triggered K-Stew’s affair. “After watching her parent’s marriage decay
over the years, Kristen’s views on relationships would have definitely been
affected.” a relationship expert said.

Photo: When Funke Akindele (Jenifa) was a baby...she's so cute!

I am still a virgin - Nicki Minaj