Don’t
we all wish! At least I do, and I have not hidden my feelings about it here, I
am pretty straight with my feeling here. She goofed and she knows it, the whole
world knows it. 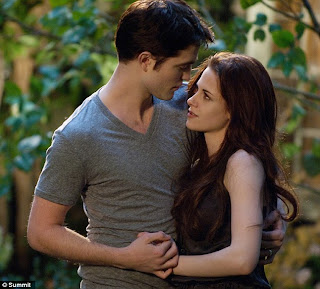 I guess why it is harder for Robert to get past it is because
now the whole world knows and it puts alot of pressure on him. Go with your
heart Robert, you loved her (bet you still do), just don’t give up on a
good thing. Well enough with the preaching already, they are not back together(not
yet anyway).
The photo above is one the newly released photos from the set
of the next Twilight movie, Breaking Dawn 2, which was filmed long before the
whole cheating drama began!
Mohamed Salah in tears after Egypt AFCON 2019 exit (photos)

By Tireni Adebayo
Affluence
has now become the order of the day among various Nigerian men of God.
Latest among such pastors is the presiding bishop of Prevailing Words Bible
Church, Bishop Kayode Odulaja. Sources alleged that the dark-skinned preacher
is now a regular customer of Forex traders as it has become a habit in his
church for members to make donations in foreign currencies.

The main currency in the church which is located in Ipaja, is now said to be
American dollars. Some church members, now go as far as changing money at
bureaux de change just because they have to give offerings...

By Tireni Adebayo
A Sudanese helicopter
carrying a government delegation crashed in a mountainous southern
region on Sunday, killing all 32 people on board including a Cabinet
minister, a former presidential adviser, two generals and a TV crew.

The
delegation was travelling aboard a chartered helicopter to the volatile
South Kordofan state to attend prayers on the first day of the Muslim
holiday of Eid al-Fitr, which marks the end of the fasting month of
Ramadan.

The helicopter went down "due to
harsh weather conditions" near Talodi, a small town about 650 kilometers
(406 miles) southwest of the capital, Khartoum, state-run news agency
...
Click to Continue Reading
News