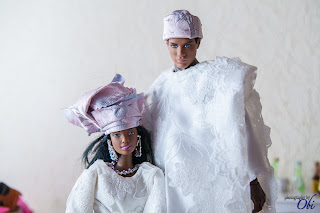 I was minding my business on the
social media a few days ago when I saw this image above.
I was like, who is
this fierce groom, then I saw the title, Black Barbie and Ken’s
Nigerian Wedding.
Of course I had to check it out. I was blown away by the full
set of pictures and decided to share it.
It was all photographed by Obi
Nwokedi, a London based photographer who photographs weddings, fashion,
portraits, and occasionally, social events, concerts, and night life.
Enjoy
the Wedding Pictures of Barbie and Ken…
Peter Okoye blasted for saying, "if you really love your children, get a business not a job"
I really loved these pictures and I hope you did too. While the
photoshoot is titled Nigerian wedding by the photographer, I think it is
more of a Yoruba wedding. And what an amazing one too, the tiny
accessories, the fashion and the style. And I’ve not even mentioned the
photography, the attention to detail is awesome, the shots, the angles,
the story-telling, everything.
Please visit Obi Nwokedi at his Website, see the complete Ken and Barbie Photoshoot at his Blog, and like him on Facebook.

By Tireni Adebayo
A mum, Brazilian Erotides Brandao, made the task of
raising 15 children harder – by giving them the same name. Brazilian  promised to name her first baby after husband Walter.
In all, the couple, from
Paraiba, North East Brazil, had nine daughters and six sons:
Walterlucia, Walterlivia, Walterlenia, Walterlonia, Walterlacia,
Walterluzia, Walterluana, Walterangelina, Waltersilviana, Walteremanuel,
Walterluis, Walteroliver, Waltermarcelo, Walterlicinio and
Walterfernando.
They also have 33 grandchildren who are all called Walter, after it was decided to continue the tradition.
Erotides, 88, whose
husband Walter died in 2003 aged 81, told Brazil’s Globo G1 website: “He
asked to put his name on all of our children.
“I didn’t know so many would come, but we never knew how to say no to each...
Click to Continue Reading
News

I saw Benson Idahosa, Bimbo Odukoya and others in hell

By Tireni Adebayo
In an interview with this man,
Brother Sadiq, who was shown the vision of hell after a forty day fasting
exercise, it was revealed that top Nigerian pastors are in hell.

Sadiq in
the interview said “The Lord said ‘come
with me’ and the next thing I saw is
that we were walking together in hell. When we got to hell, the Lord said to me, ‘this is the place you wanted
to see, don’t be afraid because of who I will allow you to see, and what I will
show you’ …the Lord said I will allow you to
talk with three men who were top preachers from your...

So, this week's diary is quite emotional. This story moved me alot so I decided to share it...enjoy!