Who says that a girl-child is not important after all, even notable Nigerians agree that they are!

The popular MTN ‘who wants to be a millionaire’ show anchor, Frank Edoho has said that “Girls are my retirement benefit”.
In the latest broadcast of the show (August 3, 2012), Frank Edoho (father of three -2 girls and a boy) while addressing one of the contestants, said “…I dislike guys who often mistreat their wives for giving birth to girls” (Yayy)

Frank further said “I love my girls…Girls are more likely to come back to say daddy, daddy, daddy I miss you or check on daddy even after they get married…Boys rarely do that, once they are 18, they will just go and not look back…”
Honestly, Frank I feel you + I would really love to see a picture of you and your pretty girls!

We all have this dream too, it's just that certain 'obvious' factors are fighting hard from making this dream a reality...God help Nigeria!

Annie Macauley, 2face's wife has reacted to the media claims that "state that she is pregnant...". She debunked the 'claim' via her twitter handle this morning (I hope Nigeriafilms.com get to see this)!

My previous report:
Indeed, Innocent Idibia is a blessed and very fertile man. Despite
the fact that he has had six children from three different mothers, his wife, Annie
Macaulay is pregnant again.

Check out kano Nwankwo and his lovely family 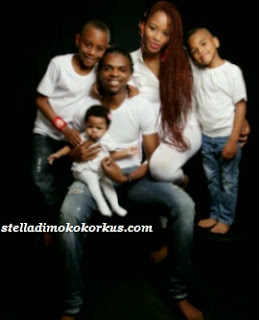