Chief (Mrs.) Joyrita Osokogu, mother of the late Cynthia
Osokogu, who was murdered by her Facebook friends, has said that the
killers of her daughter earlier demanded N20million from her.

She disclosed this at the ECWA Staff new GRA home at Farin-Gada area of Jos.

According to her, “On Sunday July 22nd, she called me to tell me that
she had arrived Lagos to collect some goods that had just arrived from
overseas and promised to come and see me immediately she arrived from
Lagos. So when she did not call me on the day she was supposed to
arrive, I called her number and it wasn’t going…I went to the police to
complain… when we called the number again…someone picked it up and…
told
me she was in Symbol hospital in Benin which turned out to be a fake
hospital. ..They said they had kidnapped her and demanded for N20million
with a fake account number…two weeks later they told me that I should
not bother to call again, that she had been killed…it was after this
that I declared her missing.”

Meanwhile, Major General Frank Osokogu (rtd), father of the late
Cynthia Osokogu, said that the death of his daughter has not been in
vain. 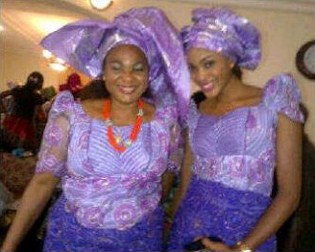 The retired general, who disclosed this while addressing journalists
in Jos on Friday, said “Cynthia’s death serves as a caution to youths
who get to know friends on social media and venture to meet them.”

Describing the daughter’s action as an adventure which became too
costly, Osokwu asked youths to be watchful over what they do on social
media.

The late Cynthia attended Command Secondary School, Jos where she won
many laurels and she graduated from Nassarawa State University at the
age of 21. She read English Education.

She was studying Public Administration in her Master’s programme and just finished her exam before she met her death.
Culled from Channels tv

Photo: Is this Modelling or a Glorified Modern Day Madness?

Video of how Cynthia was ‘bastardized’ by her killers