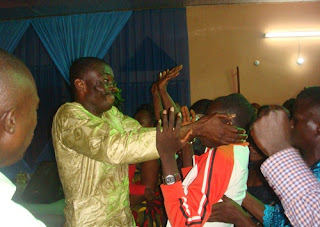 All these pastors shaaaa….
The General Overseer of the Mountain Movers Fire Ministries Int’l,
Pastor Basil Princewill has been arrested by the FCT Commissioner of
Police for raping teenage girls.
Some popular Nollywood actors who are said to be regular faces in Pastor
Princewill’s church include Zack Orji, Larry Koldsweat and Sammy
Okposo.
A local media reported that Pastor Princewill, whose church is location
in Nyanya Abuja, was previously dragged before an Abuja Chief Magistrate Court in
Karu.

The police prosecutor, Oyemisi Abiola told the court on July 2, that accused had several unlawful
carnal knowledge with a 14-year- old and another 15-year-old girl, both
students and also members of his church.
Mr. Abiola said that the Pastor did that on pretence that he was
carrying out deliverance on them and in the process he impregnated the
first victim.

He added that the accused (Pastor Princewill) conspired with
second accused (Odey), who took the victim to Fantami Head Medical
Centre, Mararaba, Nassarawa, and falsely claimed to be the father of the
victim.
The prosecutor said that the girls pregnancy was aborted without her
consent and intimidated her that if she disclosed the situation to
anybody that she would die.
Furthermore, Mr. Abiola said that before the incident, Pastor
Princewilll falsely claimed to his church members including the mothers
of the victims to be a lawyer. According to the prosecutor, the offences
committed by Pastor Princewill contravened sections 97, 179, 397B, and
268 of the penal code.
The case shall resume on July 25.
Related Articles
Tags
Abuja churches larry koldsweat Mountain movers fire ministries int'l Nigerian pastors Nyanya Abuja pastor Basil Princewill pastor rapes girl popular Abuja pastor sammy okposo zack orji

Diary: The last words of an innocent young lady

Nollywood actress, Etinosa tells pastors what to do to reduce the death rate of pregnant women

‘Do not allow people to worship you’ – Actress, Mide Martins blasts men of God

Pastor caught packing human faeces, confesses on what he wants to use it for |Video