Wow! Despite the fact that he can no
longer walk on his own  (he relies on a stroller and wheelchair), 88 year old George Bush intends jumping out of a plane on his 90th birthday!

The tears came when Bush 41 shared a letter he had written to his family
reflecting on his life:
As the summers finish out, and the seas get a little higher, winds a little
colder, I’ll be making some notes, writing it down lest I forget so I can add
to the report on getting older. Who knows, maybe they will come out with a new
drug that makes legs bend easier, joints hurt less, drives go farther, memory
come roaring back and all fears about falling off fishing rafts go away.
Remember the old song, ‘I’ll be there ready when you are’? Well, I’ll be there,
ready when you are, because there’s so much excitement ahead, so many grandkids
to watch grow. If you need me, I’m here. Devotedly,  Dad. 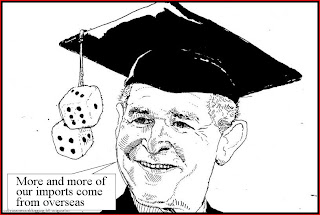 “I’m trying not to cry,” Jenna Bush said in the “Today”
studio after watching the taped interview. “The good news is my
grandfather says he’s not done skydiving. Yes, his next goal is jumping out of a
plane on his 90th.”
The one-term president who said it was a “terrible, awful feeling to
lose to Bill Clinton in the 1992 presidential election…I really wanted to win and worked hard” went skydiving to mark his 85th birthday in
2009.
I can’t wait for him to clock 90…I intend covering the ‘jump-out-of -the-plane’ thingy, trust me *winks*

So Whose baby is it anyway?!!!

I flashed my underwear to attract Bill Clinton – Monica Lewinsky