Ex-miss world, Agbani Darego has debunked the claims that she is getting married to Politician Timi Alaibe.

Agbani says Alaibe is a relative of hers
and so can never get into any intimate relationship with him (Halleluyah, it better be).

My Previous report:
Remember Agbani Darego, the Nigerian beauty that was crowned Miss world in 2001 (when she was 18years old).

Well, after 11 years of being single *winks*, the ex-beauty queen is finally ready to walk down the aisle. 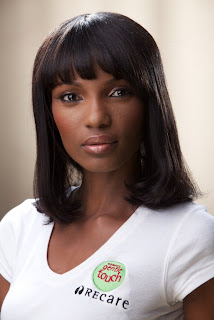 Sources close to the couple told Daily Times that Ibiagbanidokibubo Asenite Darego, has accepted a marriage proposal from influential
Bayelsa politician, Timi Alaibe. (Why him, why not anyone else?)

Timi Alaibe is the Special Adviser to President
Goodluck Jonathan on Niger Delta, and local media reports say he lost his wife not too
long ago.
Agbani, I wish you well oh and I hope you make the right choice but if I were you I would think twice!

“You don’t age” Fans exclaim as mum of one, Agbani Darego teases with new photos