Yipeeeee…so I finally found out why Pastor Chris and his wife, Stephanie Henshaw separated, plus other mouth-watering revelations concerning their marriage!!! 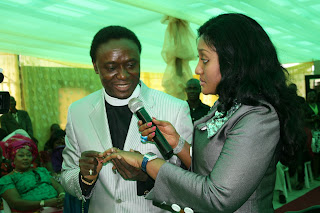 When Chris Okotie married Stephanie Henshaw four
years ago, he became her third husband!!! (What???????)
Interestingly, Stephanie was a widow who had three children from two marriages.
However,
not much was known about the state of affairs of the marriage as the
couple was seen severally at public outings, holding hands and
displaying public show of affection until their recent divorce.
A very
close source who claims to know Rev. Okotie well alleged that Okotie’s
marital problems stems from his presumed inability to father a child.
“It’s
very difficult to push to the public, but the reasons Okotie’s
marriages are not working is because of childlessness. It’s a private
thing, and he is battling the problem.Tina was with him for about
17 years without a child to show for the marriage. That was why Tina
had to relocate to America, and remarried. I even heard she has a child
now…a woman generally does
not feel secure if she doesn’t have a child for her husband, and
especially if the man is seen or suspected of keeping other women. That
is the issue with Okotie and Stephanie. I don’t want to say more than
this. Please.” the source disclosed to first weekly magazine.
Meanwhile, a local media reports that ‘during an interview on a gospel programme which is
yet to be aired, the man of God, Chris Okotie, disclosed that he is going to marry again because it’s not good for a man to be alone, quoting God from the book of Genesis.My previous report:
Rev Chris Okotie’s of the House hold of God church has done it again! *winks*

He has annulled his second marriage; a marriage of four years. He made the announcement in his church saying he was separated from Stephanie
Henshaw whom he married in August 2008. “Stephanie and I are no longer married. We have separated. You can
see she’s not in church today. It’s due to irreconcilable differences
and you should please respect our wishes at this time because there is
no going back,” he was quoted to have said.
Local media reported that the announcement left his church members speechless and puzzled for
seconds. (who wouldn’t be). He was first married to Tyna his long time
friend, but the marriage packed up after 17 years without any child. Chris Okotie was one of the candidates that contested for the last presidential election but he failed woefully….
Okotie
is another firebrand preacher that often sends his audience into
ecstasy. He is also known for televangelism, and for preaching the end
times which he titles ‘The Apocalypsus.’
In his messages, Okotie
always reveals his knowledge of the Book of Revelations beyond the
ordinary and in a very complicated language which has prompted many to
go to church with one or two dictionaries. 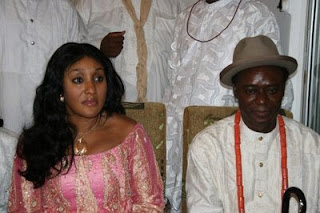 Pastor Chris Okotie is not talking to the press at the moment.
Quite a
number of them have tried to reach him  but he ain’t having none of
that; however a press release has been released by his church secretary.
In the meantime, his latest divorce has generated a lot of
contorversies from Nigerians.

An opposition party on PM newspaper, argued that “If Okotie cannot manage a mere woman, how can he preside over the
country?, thankGod he wasnt voted in” he said.
A
reader who identified himself as Panda reasoned that by divorcing his
second wife, Reverend Okotie has not set a good example for those
looking up to him.
According to him, Okotie is not qualified to be a worker in any church, much more a pastor.
Iphy said Okotie has no biblical understanding of the Book of Revelations he teaches.
“That he spoke grammar that the congregation needed
to look up in the dictionary is not evidence that he was teaching any
biblical truth. Rather, it is evidence that his teachings have no
biblical foundation so he needed to confuse the people.“
Also, members of the House Hold of God (Chris Okotie’s church) have been
barred from discussing his failed marriage, either in secret or in the
open. The members were warned advised that it is in the
best interest of the church not to discuss Chris Okotie, Stephanie
Henshaw or their failed marriage, because saying something about it “could lead them to hell.” lolz!
The warning
came after some church members were approached by members of the press
to talk about what could have led to the disintegration of the four year
old marriage. Some people are still talking sha! *cough*
Nawa oh# I think this man shouldn’t attempt marriage again…it’s like marriage is not his thing *winks*.

Bill Gates is leading an agenda to destabilize the world, the church – Rev. Chris Okotie

Chris Okotie calls coronavirus an idol, kicks against guidelines given by CAN

These are the most searched presidential candidates in Nigeria

What Chris Okotie said in an interview about himself, 30 years ago

When i celebrated my 35th birthday, i didn’t know i was celebrating my send off – Dele Momodu

So 11 is a devilish number? Chris Okotie proves GEJ is an occultic man

How Chris Okotie used to look like, before he became rich and er, fine (Photos)

“Many Pastors Will Go To Hell”- Pastor Chris Oyakhilome