As confusions trail the circumstances surrounding the death of ace footballer, Rashidi Yekini, you will recall that the former Super Eagles striker died shortly after he was ‘rushed’ to Al-Amin hospital by members of his immediate family on the 4th of May, 2012.

Revelation 1# The doctor’s report:
The Managing Director of the Hospital, Dr. Gbenga Ogunshina, who spoke with Punchng.com on Wednesday hinted that Yekini was in an unconscious state when he was brought to his hospital and that it did not occur to him that he was the popular footballer initially.
He said, “We tried our best to save his life but we did not give him VIP treatment because those who brought him failed to disclose his personality to the hospital. When he was brought in we did not realise that he was a celebrity. He was presented to us by one of the men who brought him in as Alhaji AbdulRasheed AbdulYekeen”

It was gathered that the remains of the deceased were moved out of the hospital by those suspected to be family members around 12 am on May 4. An initial report, however, had it that the late international footballer died at a spiritual healing home.

Revelation 2# Spiritual home refutes claim:
When the spiritual home where Yekini was purportedly taken to was visited, its proprietor and head, Chief Fakunle Oparinde, who is the Olori Oluwo of Oyo State, expressed shock at the rumour that he was brought to the place.
According to him, Yekini was not brought to the home as widely reported.

Oparinde said, “He was here only twice and that was in 1999. That time he came concerning the case of his estranged wife. He asked me to help reunite him and a woman that had a child for him. The woman, according to him, failed to reunite with him after an issue arose between them. He said that he wanted the woman back into his life. I helped him and he came back few days after in a white Mercedece Benz V-boot which he drove by himself.”

Revelation 3# Death was not registered:
The late footballer’s sister, Rafiat, has warned journalists to leave the family alone, saying “Just leave those people who are saying that we killed
Yekini. Whatever they like, they can say…Yekini died in hospital. The hospital is Alfa’s
hospital. Yekini has gone. Let Yekini rest. Any reporter that asks me
questions again of Yekini’s death, infact I will…”
Meanwhile, Yekini’s younger brother, Akeem, and the Chairman, Oyun Local Government, Kwara State, Mr. Omoniyi Ibrahim, said that his death was not registered at the council.

Ibrahim said the death was not registered since it was believed that it had been registered at the local government where Yekini died. According to him, registering it at the Oyun LG council would mean double registration.

Akeem explained, “You know in this our side, some of our family members are illiterate. When he died, some of them wanted to bury him even early in the morning. But I stopped them, telling them that some of his friends would come. That was why the burial was delayed till later in the evening.”

Akeem said when the family members noticed an unusual generosity being displayed by Yekini, they felt that the development was abnormal. He added that Yekini’s mother, Sikirat, and Yekini’s sister, Rafiat, took the footballer to an alfa and later to a hospital where he died.

He also said members of the family neither caused Yekini’s death nor should be blamed for his demise. He stated that the family only wanted to help the deceased recover by getting treatment for him but regretted that he died in the process.

Is this fashion or what? lol...
Imagined they showed up like this at your wedding reception...would you let them in? lol... 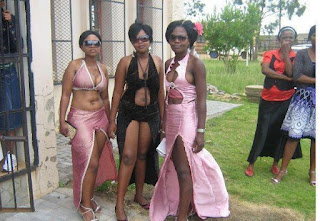